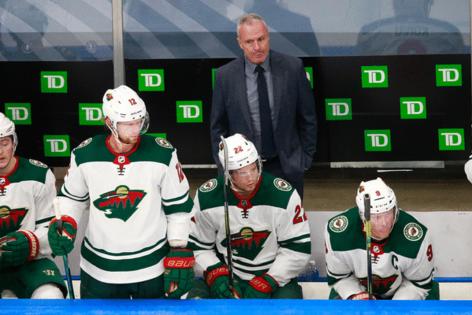 NEWARK, N.J. — The Wild didn't arrive on time for the game, but the team never fell behind on the ice.

Despite getting dropped at Prudential Center late — so much so that puck drop was pushed back about half an hour — the Wild was still prepared enough to slip by the Devils, 3-2, in a shootout on Wednesday to return home from its East Coast road trip 1-1-1.

Kevin Fiala delivered the decisive goal in the shootout, this after New Jersey's Yegor Sharangovich called for extra time when he scored with 1:07 left in the third period.

Goaltender Cam Talbot made 40 saves in addition to stopping all three shootout attempts he faced, a stellar performance after an unusual pregame.

Wild players didn't get to the arena until 6:26 p.m. local time, with game time initially set for 7 p.m.

The delay was caused by a closure to the Holland Tunnel, which connects New York City with New Jersey, and a new start time was scheduled for 7:33 p.m.

Typically, players arrive for games no later than two hours before puck drop, so this traffic snafu severely cut into the Wild's preparation time. But when the action started, the team didn't look frazzled.

Instead, the Wild scored first for the first time on this trip after trailing early in a loss at Florida and shootout setback to Tampa Bay.

This is the fourth time in Hartman's career he's hit double digits in goals and first season since 2018-19.

Calgary Flames forward Matthew Tkachuk’s goal broke a 2-2 tie late in the third period and saddled the Chicago Blackhawks with a 5-2 loss Tuesday.

TAMPA, Fla. — It didn’t matter that it was the third goal of the night for the Lightning.

It mattered much more that it was Corey Perry behind the shot, scoring his first goal of the season.

And the celebration said ...Read More

SEATTLE — Leave it to an expansion team to alleviate what ailed the Penguins.

In the first three games of this road trip, they got just one goal from someone not named Guentzel or Crosby. Their middle six had been a ...Read More