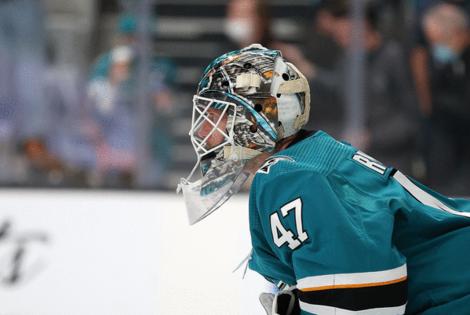 SAN JOSE – Alexander Barabanov scored at the 1:42 mark of overtime to give the Sharks a 2-1 win over the Carolina Hurricanes on Monday.

After a tripping penalty to Carolina defenseman Brett Pesce had just expired, Barabanov, stationed at the side of the Hurricanes’ net, took a pass from Tomas Hertl and scored into a mostly empty net past goalie Antti Raanta for his third goal of the season.

Sharks goalie James Reimer finished with 22 saves as the Sharks won for just the second time in their last six games.

The Sharks started overtime on the power play with Pesce off for tripping with 22 seconds left in the third period.

The Sharks had only nine power-play opportunities in their past five games before Monday and did not get any chances with the man advantage in games against the Winnipeg Jets on Nov. 11 and the St. Louis Blues last Thursday.

The Sharks created only a handful of scoring chances in the first two periods. When the Sharks did generate some quality looks, it was usually because of their top line of Timo Meier, Logan Couture and Rudolfs Balcers.

That trio had nine of the Sharks’ 16 shots through 40 minutes as they trailed the Hurricanes 1-0.

Tony DeAngelo took control of the puck inside the Sharks’ blue line and ripped a shot past Reimer for his fourth goal of the season at the 1:16 mark of the second period.

The Sharks got that goal back near the start of the third period.

After a forecheck by Jasper Weatherby inside the Canes’ zone created a loose puck, Labanc took control and used a wrist shot to beat Raanta for his third of the season at the 3:54 mark of the third. The goal broke an eight-game goalless drought for Labanc, whose other four points this season came on the power play.

James Reimer was making his third start in the last four games and was playing his first game against the Hurricanes since he signed a two-year deal with the Sharks in July.

So far this season, Reimer has played as well as anyone could have expected.

Reimer came into Monday with a .938 save percentage and 1.98 goals-against average in nine games — the best totals of his 12-year career.

The Sharks’ homestand continues with games against Ottawa on Wednesday and Toronto on Friday.