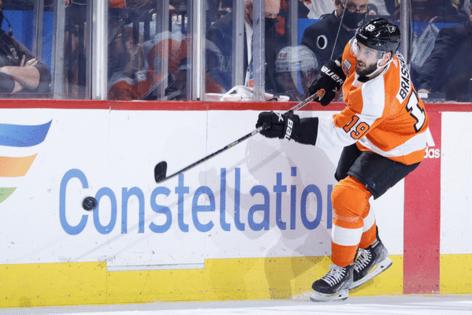 PHILADELPHIA — In his first home game after coming off of injured reserve on Nov. 13, Flyers center Kevin Hayes celebrated the occasion with his first goal of the season and a special tribute.

Less than five minutes into the second period, Hayes’ initial shot from the right faceoff circle was blocked by defenseman Rasmus Andersson, but the rebound came back his way and Hayes managed to find the open net to tie the game, 1-1.

After the puck slid across the line, Hayes raised his arms above his head in jubilation. Then, he immediately looked skyward and pointed up, likely in honor of his late brother, Jimmy. His goal helped the Flyers build momentum into the third period and overtime, when Cam Atkinson scored the winning goal in the Flyers’ 2-1 victory. The goal came 45 seconds into overtime.

The night nearly took a scary turn for Hayes. Late in the second period while the Flyers were on the power play, Hayes collided with Elias Lindholm in the offensive zone, skated off the ice in pain, and immediately headed to the locker room. However, Hayes returned for the third period and appeared unhindered.

Taking away time and space

When the Flyers ventured out to Calgary for their first meeting this season against the Flames, they became well-acquainted with the Flames’ ability to limit their opponents’ time and space with the puck. The Flames are ranked fourth in the NHL in five-on-five Corsi For percentage, which is an indicator of the team’s puck possession, at 54.4%.

During the first period, the Flames came out playing a tight-checking game. The Flyers struggled to exit their own zone cleanly and the Flames were able to take advantage early on. A contested Ivan Provorov pass from the blue line through the neutral zone was picked off by the Flames, which created an offensive-zone opportunity that ended in their only goal of the game at the hands of defenseman Oliver Kylington.

However, in the second and third periods, the Flyers had more success on their breakouts and were able to sustain offensive pressure. They finished with a 61.76% Corsi For rate in the second and a 62.5% in the third. Most importantly, they turned those shot attempts into goals with Hayes’ tying point and Atkinson’s goal.

Going into their game against the Flames, the Flyers were 3-for-30 in their last nine outings on the power play. In the first period, the Flames gave the Flyers three opportunities to try to turn their fortunes around on the man advantage — once on a Mikael Backlund boarding call, another on a Andrew Mangiapane holding minor, and a third on a Matthew Tkachuk interference. The Tkachuk call came while the Flyers were on the second power play, which allowed them 31 seconds of five-on-three time.

The Flyers came up empty in all of their power-play opportunities in the first period and only managed to put four shots on goal in that span. The Flames even created a shorthanded two-on-one breakout, which developed after a Hayes cross-ice pass was intercepted in the Flyers’ offensive zone. Ivan Provorov played the rush well and Hart made the save. Regardless, the Flyers failed to build any sort of momentum on their power plays during the first 20 minutes of the game.

Through three periods, the Flyers went 0-for-6 on the power play.

Coming off of a season-high save performance against the Carolina Hurricanes (39), goalie Carter Hart looked strong and poised in net once again against the Flames. Hart stopped 33 of 34 shots through three periods and overtime.

Even when the Flames had odd-man, shorthanded rushes, Hart came up with the save. Late in the second period, a two-on-one developed with Elias Lindholm and Mikael Backlund sprinting down the ice. Hart made the initial pad save on Lindholm, then quickly slid across the crease to deny Backlund. Hart even held winger Johnny Gaudreau goalless. The South Jersey native finished the night with a team-high 10 shots on goal.

The Flyers take on the reigning Stanley Cup champions, the Tampa Bay Lightning, on Thursday in the second game of their three-game homestand (7 p.m., NBC Sports Philadelphia).