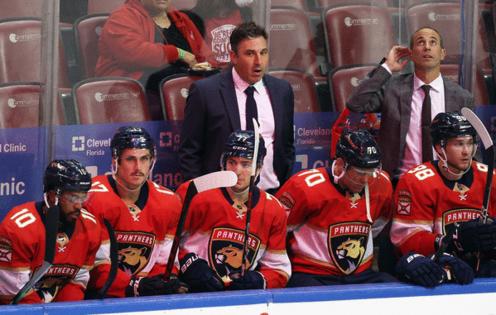 SUNRISE, Fla. — The first period for the Florida Panthers on Tuesday was a celebration, both of their record-setting captain and the potentially special season they continue to put together.

In the first few minutes of the second, glee turned to angst and even a 6-1 win against the New York Islanders, another of the NHL’s best teams, wasn’t what mattered most.

Superstar center Aleksander Barkov, playing in Sunrise for the first time since he set the franchise’s all-time goals record last Tuesday, went down with an apparent left knee injury in the opening minutes of the second period and did not return. The injury looked potentially serious — coming on an illegal hit from Islanders defenseman Scott Mayfield — and the 26-year-old captain couldn’t put any weight on his left leg as he skated off the ice to tepid applause from the nervous crowd inside FLA Live Arena.

The injury robbed from another otherwise spectacular night for Florida. The Panthers snapped a four-game losing streak — their first multiple-game losing streak of the season — by scoring four goals in the first period against one of the best defensive teams in the league, chasing New York goaltender Ilya Sorokin from the game after only 20 minutes. They also improved to 8-0-0 at home and, for the moment, pushed three points ahead of the Hurricanes for the league lead.

After going 0-2-2 on its four-game road trip, Florida returned home this week and Andrew Brunette made changes to the lineup. The interim coach experimented with some new looks in the second period of an overtime loss to the Tampa Bay Lightning on Saturday and liked what he saw enough to stick with it Tuesday.

Among the changes: Barkov and All-Star left wing Jonathan Huberdeau reunited on the top line. They helped spark a comeback effort Saturday and they helped Florida jump ahead Tuesday.

Barkov made a pass to Anthony Duclair streaking down the left side and the winger flung one more across the goal mouth for Huberdeau to knock home. The Panthers took a 1-0 lead on the Islanders (5-5-3) with 13:02 left in the first period and Barkov extended his points streak to 10 games.

It was the start of a first-period onslaught to quickly put the result out of doubt. Florida got goals from three of its four lines — fourth-line left wing Ryan Lomberg scored with 5:20 left in the period, second-line forward Carter Verhaeghe scored with 3:56 left and right wing Patric Hornqvist added another for the fourth line with 1:47 left — to take a 4-0 lead into the first intermission. No team has allowed fewer goals than the Islanders since the start of the 2018-19 NHL season and the Panthers dismantled them in the first, firing 17 shots at Sorokin, and generating 12 scoring chances and six high-danger chances.

Less than two minutes into the second period, Barkov tried to enter the offensive zone and Mayfield met him at the blue line. Mayfield led with his left knee as he tried to check Barkov and his knee hit the outside of Barkov’s left knee, causing it to buckle as he tumbled to the ice. The officials immediately whistled Mayfield for kneeing and later handed him a game misconduct — ejecting him from the game — for a hit they deemed dirty.

Barkov, meanwhile, stayed down on the ice while trainers came out to check on him, and needed help to get off the ice and back into the locker room.

The game started to get chippy in the second period and Florida eventually stretched its lead to 5-0 on a goal by star defenseman Aaron Ekblad before New York got one back near the end of the period. In the third, those seething tensions finally came to the surface, although it was mostly New York losing its cool.

Radko Gudas got into a pair of scuffles, landing a couple solid punches on Kyle Palmieri after the Islanders winger instigated and later got dragged to the ice by New York left wing Matt Martin, who was assessed a 10-minute misconduct for yanking at the defenseman’s arm after the linesmen broke up a fight.