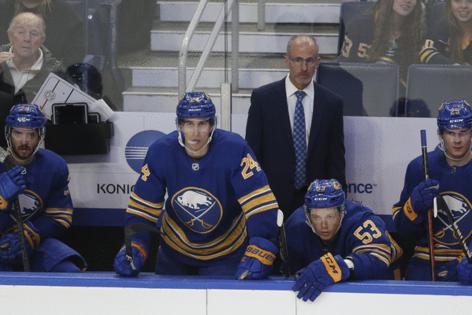 Six games into this young season, the Lightning have failed to play with the lead in regulation, and while there were plenty of positives to draw from in their 5-1 road loss to the upstart Sabres on Monday night at the KeyBank Center in Buffalo, they have quickly learned how difficult it is to win when you’re constantly playing from behind.

Monday’s game had to be especially frustrating for the Lightning (2-3-1) because they dominated the Sabres in nearly every facet of the game except for the final score.

They outshot Buffalo 11-3 in the second period and dominated in zone time, but went into the second intermission down 2-1 after allowing a late goal to Drake Caggiula with 37.8 seconds left.

Mikhail Sergachev’s pass at the blue line crossed up Erik Cernak and hit off the side boards, allowing Caggiula to jump the play in the neutral zone and create a breakaway. Caggiula avoided a backcheck by Sergachev and flicked a fadeaway wrister across the crease and past Lightning goaltender Brian Elliott gloveside.

Vinnie Hinostroza put the Sabres up by two goals 4:25 into the third. Hinostroza took the puck from Mathieu Joseph at the Lightning blue line and unloaded a wrister from the high slot that Elliott had trouble telegraphing with his glove.

The Sabres scored a pair of empty-net goals late, including one six seconds after Lightning coach Jon Cooper first pulled Elliott for an extra attacker. The Sabres won a faceoff in their own zone and Robert Hagg flicked the puck up ice into the empty net with 5:35 left.

The Lightning dominated in zone time, executing their forecheck for most of the night. Tampa Bay’s fourth-line rookie duo of Taylor Raddysh and Boris Katchouk had their best game of the season, playing aggressively and creating scoring chances.

Tampa Bay hadn’t played the Sabres in nearly two years — their last meeting was Dec. 31, 2019 — and just five players from that Buffalo team played against the Lightning on Monday night. After totalling the fewest points in the league last season, the Sabres have jumped out to a 4-1-1 start.

The Lightning fell behind early, allowing a goal in the game’s first two minutes, and despite several scoring changes, struggled to score in the first period.

Alex Killorn had two wide-open looks perched in front of the net, but sent both shots into Sabres goaltender Craig Anderson. But shortly after his second failed opportunity, Killorn swiped at a loose puck from his knees and found the back of the net.

It was just a tying first-period goal, but for the Lightning it meant a little more in getting the monkey off their backs. Entering the night, the Lightning had yet to score in the opening period.

Killorn’s goal came after defenseman Ryan McDonagh put a puck on net from the left point. It was stopped by Anderson, but Killorn cleaned up the loose puck.

The Lightning fell behind just 1:41 into the game on Victor Olofsson’s goal. Elliott stopped Tage Thompson’s shot from the left circle on the rush, but the puck deflected out to Olofsson coming across the right circle and Olofsson filled an open net.

Elliott, making his first start with the Lightning as Andrei Vasilevskiy’s backup, didn’t get tested much, making 20 saves on 23 shots. Anderson made 35 saves for Buffalo.