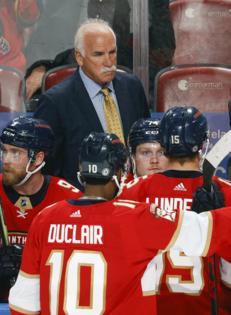 It doesn’t matter who’s in goal, who’s missing from the lineup or who the opponent is. The Florida Panthers keep rolling.

They spent the first two weeks of the season mostly beating up Stanley Cup contenders and playoff staples. They won with Sergei Bobrovsky and Spencer Knight in goal, and while shuffling around pieces on their bottom lines. On Monday, they continued the best season-opening winning streak by beating the league-worst Arizona Coyotes, 5-3, in Sunrise.

The Panthers (6-0-0) are only the 25th team in NHL history to win six in a row to start the season and they’re now four wins away from matching the league record of 10, shared by the 1993-94 Toronto Maple Leafs and 2006-07 Buffalo Sabres. Florida’s previous season-opening record was four straight wins, set last season and surpassed Saturday when it beat the Philadelphia Flyers.

Of the other 24 teams to start the season on a six-game winning streak or better, all but three eventually made the Stanley Cup playoffs, 11 won their division or finished first in the league, 10 reached at least the semifinals and four won the Cup, including coach Joel Quenneville’s Chicago Blackhawks in 2013.

The Panthers’ record-setting win against in Philadelphia capped a confidence-affirming five-game run to open the year. Their first four wins all came against teams with top-10 Cup odds, according to DraftKings, and the Flyers are another postseason contender. They outscored those five 22-9.

Florida’s sixth game had the makings of a trap. The Coyotes (0-5-1) entered Monday as one of only two winless teams and drew a sparse crowd at FLA Live Arena. The Panthers follow the game with a meeting against the Boston Bruins, another Cup contender, on Wednesday. The Coyotes even scored first, beating Knight on their first shot on goal on a breakaway with 2:17 left in the first period, before Florida did what it’s supposed to do against perhaps the worst team in hockey -- for the most part.

The Panthers tied the game at 1-1 before the end of the first period and outshot Arizona, 11-1, in the opening period. In the second, they scored twice more to pull away and added another in the third. Their final edge in shots on goal was 40-20, their edge in scoring chances was 25-15 and they led 13-2 in high-danger chances. Knight only faced only 17 shots in 5-on-5 action and finished with 17 saves in his second appearance of the season. Florida even used a chance to go against the Coyotes’ league-worst penalty kill as a chance to get its lackluster power play right for at least one day.

Joe Thornton scored his first goal as a Panther on a power play in the first period, tapping home a rebound with 18.8 seconds left to tie the game 1-1. Winger Frank Vatrano scored the go-ahead goal off another rebound with 14 minutes left in the second period, and Florida added another power-play goal with 9:41 left in the period when star defenseman Aaron Ekblad’s slap shot bounced off Arizona defenseman Jakob Chychrun and into the net for a 3-1 lead.

The Panthers were just 3 of 22 on the power play in their first five games. They finished 2 of 3 on Saturday against the Coyotes, who have now given up nine power-play goals in 14 chances.

After two near-flawless periods, Florida nearly unraveled in the third. Arizona actually outshot the Panthers in the period and scored twice in 34 seconds to cut Florida’s lead to 4-3 with 7:29 remaining.

All-Star left wing Jonathan Huberdeau, however, scored his third goal in two games with 13:06 left in the game to put the Panthers up 4-1 and Florida needed it to survive the Coyotes’ surprising late onslaught.

It was the first real sign of weakness for the Panthers this year and it nearly cost them their winning streak. Instead, they sit all alone at the top of the league standings.