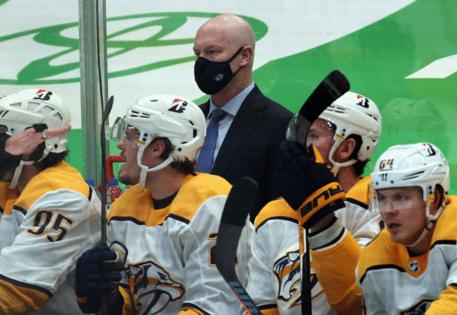 After four consecutive comeback wins to open the season, becoming just the fourth team in NHL history to accomplish that rare feat, the Wild's come-from-behind mojo disappeared Sunday in a 5-2 loss to the Predators in front of 16,014 at Xcel Energy Center that dropped the team to 4-1.

Next up for the Wild is a three-game road trip that begins Tuesday at Vancouver.

But the players in front of him were solid, too, giving him a healthy cushion to work with after scoring three goals in the first period – two of which came on the power play. Predators captain Roman Josi had a hand in all three of those tallies, including scoring the first one, while Ryan Johansen had two goals against Wild goalie Kaapo Kahkonen, who was between the pipes for the first time this season. He finished with 24 saves.

The first puck the Predators put on net 3 minutes, 45 seconds into the first period ended up behind Kahkonen, as Josi pounced on a loose puck that hit traffic in front during Nashville's first power play.

This wasn't unusual territory for the Wild considering the team had given up the first goal in its previous four games. But not until facing the Predators did that hole sink three goals deep.

By 5:54, the Predators doubled their lead on another power play goal after Johansen put-back his own rebound. Their power play went 2-for-6, and the Wild was 0-for-5.

Then, at 12:25, Rosi spun to avoid a Dmitry Kulikov hit and set up Johansen for a glove-side shot.

Not until 11:30 elapsed in the second period did the Wild finally solve Ingram.

Jon Merrill sent an outlet pass off the boards to Nick Bjugstad, who wired in the puck off the rush.

But only 1:45 later, Nashville reinstated a three-goal lead during a strong shift. After former Wild forward Mikael Granlund hit the post and Matt Duchene shuffled the puck just wide, Filip Forsberg tipped in a Rosi point shot to put the Predators up 4-1.

Overall, Josi racked up four points and Duchene three while Johansen and Forsberg had two apiece.

Nashville's third line also contributed, with Tanner Jeannot batting in a puck with 1:25 remaining in the second period.

The Wild's fourth line was its best, with Nico Sturm tucking a Brandon Duhaime rebound by Ingram at 19:57 of the second to wrap up the scoring. Duhaime's assist on the play was the first of his NHL career.