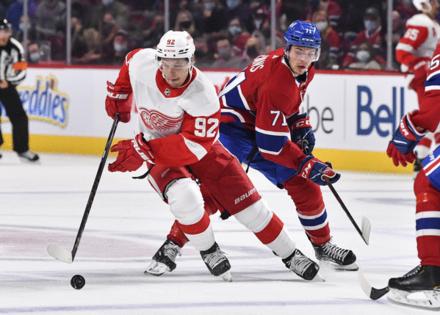 Montreal, coming into the game winless, unleashed a lot of frustration with a 6-1 victory over the Red Wings.

Dylan Larkin scored just five seconds into an early power play, giving the Wings a 1-0 lead and seemingly the start the team wanted against the confidence-poor Canadiens.

But, instead, Montreal scored six unanswered goals, drove goaltender Thomas Greiss (12 saves on 17 shots) out midway through the game, and convincingly earned their first victory.

Mathieu Perreault had three goals for the Canadiens, who came into the game with only four goals as a team in those five losses.

The Wings (2-2-1) have lost two consecutive games, and visit another winless team in Chicago on Sunday.

The Wings played without Tyler Bertuzzi, who was unavailable because of his non-vaccinated status, which makes Bertuzzi unable to enter Canada.