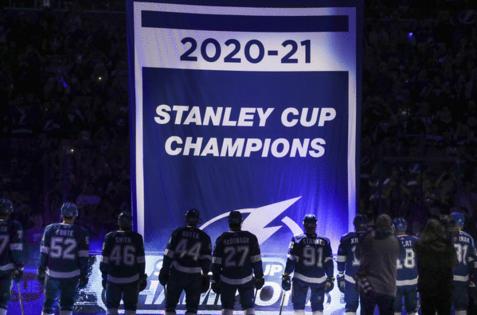 TAMPA, Fla. — They would surely prefer fewer late-game dramatics, but early in this season, the Lightning have had a penchant for third-period comebacks.

In fact, the Lightning have never owned a lead in regulation this season. Saturday night against the Colorado Avalanche, they took another game to overtime.

After a scoreless overtime, the Lightning and Avalanche went to six rounds in a shootout before defenseman Cale Makar scored the winning goal to send Tampa Bay to a 4-3 loss.

Center Brayden Point scored a 6-on-5 goal with 2:35 remaining in regulation to knot the score at 3. Working with an empty net, the Lightning won a faceoff in the Avalanche zone, and defenseman Victor Hedman drew attention to himself at the left point, then passed to Point, who had open space nearing the slot and rifled a shot past Colorado goaltender Darcy Kuemper.

The Lightning overcame a controversial tripping penalty on Andrei Vasilevskiy in the third that gave a struggling Colorado power play it’s sixth man advantage of the night, and the Avalanche converted for just the second time in 20 man-advantage opportunities.

Colorado star center Nathan MacKinnon scored 9:50 into the third period to give Colorado a 3-2 lead.

Moments after MacKinnon’s goal, Kuemper hooked Point skating around the net, but the play went uncalled, prompting an outcry from the Amalie Arena crowd.

Steven Stamkos scored a tying goal — his fourth goal of the season — 3:44 into the third period after defenseman Ryan McDonagh jumped in the play and rifled a shot from the right circle. Ondrej Palat then won a loose puck to the right of the net and fed Stamkos for a redirection in the crease.

The Lightning had time to work on their power play, which struggled Tuesday in its first game without star forward Nikita Kucherov, but were 0 for 3 with the man advantage (and 0 for 9 over the past two games). Tampa Bay’s penalty kill unit was 5 for 5 until MacKinnon’s third-period score.

Colorado had gone up 2-1 with 8:09 left in the second on Mikko Rantanen’s third goal of the season. The Avalanche had a 2-on-1 breakaway, and MacKinnon fed Rantanen coming across the right circle, who rifled a one timer past Vasilevskiy under his left pad.

Lightning forward Mathieu Joseph, elevated to the second line with Kucherov out, tied the score at 1 6:34 into the second. Joseph charged the net and cleaned up a loose puck in front past Kuemper.

Tampa Bay had its chances early, especially on the power play. One of its best opportunities came toward the end of a 4-on-4, when Palat had drawn Kuemper out of the crease, but couldn’t lift a shot over his right pad into an open net.

The Avalanche’s top forward line — one of the most dangerous in the league — scored both Colorado goals. Gabriel Landeskog opened the game with a score 9:02 into the first period.

Late in the second, Joseph fell to the ice following an knee-to-knee hit from Rantanen, which prompted a dogpile at the blue line when Alex Killorn and Anthony Cirelli jumped on Rantanen. Both Rantanen and Killorn received minors, and Joseph returned in the third period.