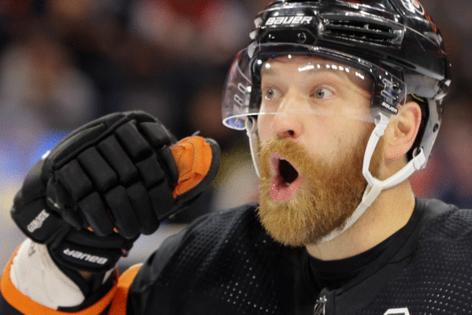 PHILADELPHIA — Flyers coach Alain Vigneault described the Florida Panthers game as “sizzling,” and when they hosted the Panthers on Saturday, the Flyers got burned.

The Panthers dominated the Flyers at even strength, outshooting them 31-29 and outscoring them 4-2. While they showed some positives, especially on the special teams, it wasn’t enough to carry them to the win. Ultimately, the ability to score at 5-on-5 helped the Panthers to victory.

The Flyers ended their homestand with a record of 2-1-1.

The Flyers knew coming in that the Panthers play a really tight gap, especially in the neutral zone. But that knowledge didn’t help them too much at 5-on-5. Other than a few players, like Travis Konecny, who were able to use their quickness to break through, the Flyers struggled to get out of the neutral zone.

It took one power play without a single shot on goal plus five more power-play shots, but Claude Giroux finally found the back of the net, ending the Panther’s perfect penalty kill record. Coming into the game, they had faced nine power-play units over the course of the season without giving up a goal. The Panthers carried that energy into the first Flyers power play, barely letting the Flyers out of the neutral zone.

The second power play started out differently when Sean Couturier opened with a slap shot straight at the goalie. Aleksander Barkov stopped it, but then faced two more shots close enough to have the crowd gasping. Finally, Giroux took aim from above the right face off circle and sent it past Barkov’s right shoulder. Giroux celebrated with a huge fist pump.

Keith Yandle, the former Florida Panther who runs point on the power play, knows you always have to watch out for Cam Atkinson when he’s on the penalty kill unit you’re facing. However, his former teammates still weren’t ready for Atkinson. On the Panthers’ third power play of the game, Atkinson swiped the puck away and took off down the ice. Barkov was the only one between him and the goal, and he stood no chance. Atkinson easily scored the shorthanded goal, giving the Flyers the lead.

The Flyers’ penalty kill also dominated on the first Panthers power play, clearing the puck five times to easily kill it. They faced a second Panthers power play shortly after on a tripping call that the Flyers fans were especially skeptical about. The Panthers scored five seconds into that one. But after that, the Flyers locked them down again and again despite going on the penalty kill seven times.

The Flyers have concluded their home stand and will head to Canada on Monday for their next three games. They start with a contest against the Edmonton Oilers on Wednesday, Oct. 27 at 10 p.m. The game will be shown on TNT.