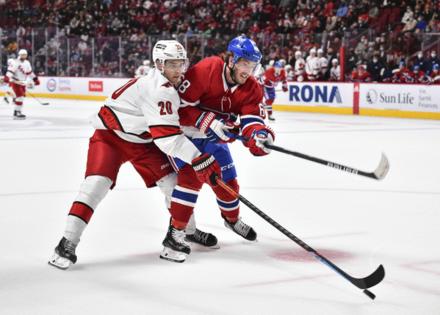 "He knows all the eyes will be on him," Canes coach Rod Brind'Amour said.

There was the not-so-small matter of playing the hockey game. The Canes were 2-0 and itching to play again, and the Canadiens 0-4 and desperate to notch a first win this season.

Kotkaniemi, in his return game to the Bell Centre, did his part and made himself a big part of the story as the Canes took a 4-1 road victory.

Widely booed when he first took the ice in the first period, the forward had Montreal fans booing again in the third when he redirected a Brady Skjei shot for his first goal with Carolina. That gave the Canes a 3-1 lead at 9:23 of the period and had Kotkaniemi and everyone on the Canes bench smiling.

Sebastian Aho scored twice, his first two goals of the season, and Andrei Svechnikov continued to sizzle with his fourth in three games. Goalie Frederik Andersen won for a third time, making 27 saves, and the Canes killed off five of six penalties.

After a scoreless first period, the Canes struck swiftly in the second. Aho and Svechnikov — No. 37, again — both scored in the first 2:12 of the period, Aho converting on a power play that began late in the first period and then Svechnikov at even strength.

Aho's first goal of the season came on Teuvo Teravainen's cross-ice pass into Aho's wheelhouse. Svechnikov went top shelf from the right side after a setup pass from Martin Necas.

Jordan Staal nearly made it 3-0, Canes, with a strong shorthanded chance in the second but the Habs then raced down ice and scored on the power play. Tyler Toffoli got position in front of the net for his first of the season — the first for the Habs and the first allowed by the Canes this season after 11 straight kills.

Andersen made a key stop with five minutes left in regulation on Jonathan Drouin, then denied Cole Caufield and Brendan Gallagher a minute later around the crease to maintain the 3-1 lead.