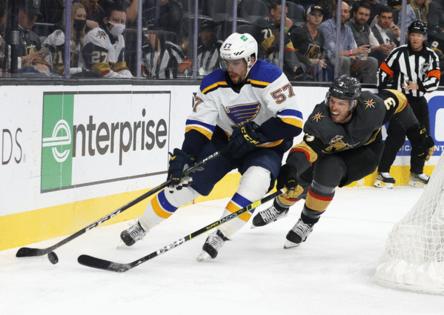 LAS VEGAS — You don’t make statements in Game 3 of a hockey season. There’s just too much road to be traveled.

Nonetheless … the Blues have won three consecutive road games to start a season for the first time in franchise history. And two of those victories have come against the teams widely considered the best in the West – the Colorado Avalanche on Saturday and the Vegas Golden Knights, 3-1 Wednesday at T-Mobile Arena.

OK, Colorado was without Nathan MacKinnon and Gabriel Landeskog. And Vegas was missing Max Pacioretty and Mark Stone on Wednesday. But the victories still count — two points a crack. Next stop, St. Louis and the home opener Saturday against the Los Angeles Kings.

Vegas seemed to be playing in a different league than the Blues last season, going 6-1-1 in the eight-game series and outscoring the Blues 34-19 in the process. But that wasn’t the case Wednesday.

With the aid of an early hooking penalty by William Carrier (on Klim Kostin), the Blues put the pressure on early. St. Louis had the game’s first seven shots on goal; Vegas didn’t get one until 6 1/2 minutes into the contest.

But once Vegas got going, it got going. By the time the high-flying, wide-open period ended, the Golden Knights had 17 shots on goal to the Blues’ 15. One of those 17 got behind Jordan Binnington, and it came on a patented Vegas 2-on-1 rush.

Reilly Smith raced down the left wing, flanked by William Karlsson to his right, and with only Torey Krug back for the Blues. Karlsson took a pass from Smith and broke in on Binnington, who made the initial save and a strong save at that.

But Karlsson was able to get a poke at the rebound, and got it past Binnington — high and to the far side.

Mere seconds after Karlsson’s goal, Klim Kostin had a breakaway, but was turned away by Golden Knights goalie Robin Lehner. The Blues continuously tried to go low on Lehner, but he was equal to the task.

Lehner has more wins against the Blues over his career than any NHL team — he entered the night 9-3-2 against St. Louis, and seemed poised for another one in the opening period.

During one five-second flurry in front of the St. Louis net with four minutes left in the period, Vegas had five shots on goal – including four by William Carrier. The start of the second period was a track meet, with both teams skating up and down the ice, and the Blues matching Vegas’ speed while getting back on defense.

Vladimir Tarasenko, playing easily his best hockey of the season through two periods, had a prime chance one minute into the period and went high on Lehner. But Lehner made the glove save.

After a stretch of sustained pressure, the Blues finally broke through, with Brandon Saad notching his first goal as a Blue 3:21 into the second on a wrister from 25 feet. Ryan O’Reilly started the scoring sequence when he passed from below the goal line to David Perron in the slot. Perron’s shot was blocked by Vegas defender Shea Theodore but went right to Saad who beat Lehner glove side to make it a 1-1 game.

Later in the period, Vegas got its first power play attempt when Colton Parayko was sent off for hooking Keegan Kolesar. But just 43 seconds into the Golden Knights’ power play, Alec Martinez tripped Saad, who was swooping in for an attempted steal on the penalty kill.

The Martinez penalty came with 8:16 left in the second, and as the period wound down, the checking intensified and the wide-open play diminished.

Early in the third period, the Blues got a power play chance when Peyton Krebs was sent off for holding Parayko. The Blues couldn’t get much going, although James Neal had a net front deflection opportunity that went wide. That penalty was barely over when Vegas got a chance to trot out its power play after Kostin went off for tripping with 12:56 left in the third.

Ivan Barbashev raced through the neutral zone for a loose puck and had a clean breakaway. Barbashev tried to lift the puck past Lehner, but the big Vegas goalie blocked it with his chest.

And then the Blues beat the Golden Knights at their own game, mounting a 3-on-2 rush with Tarasenko, Brayden Schenn and Kyrou all racing down the ice. Schenn, in the slot, passed to Kyrou on right wing, and then Kyrou went across to the crease to Tarasenko for a tap-in goal and a 2-1 Blues lead with 10:11 to play. It was Tarasenko’s first goal of the season.

The game opened up after the Tarasenko goal with both teams having point-blank chances. But this was a goalies game, with both Binnington and Lehner shining. The Blues didn’t fall back on their heels down the stretch. They stayed tight defensively, provided support on zone exits, and had a couple of offensive pushes of their own.

With 2:14 left and a faceoff in the St. Louis zone, Lehner went to the Vegas bench in favor of an extra attacker. But the Blues were tight and aggressive in the 6-on-5 situation. And then Robert Thomas got to a loose puck in the neutral and with the Golden Knights in hot pursuit, passed to Barbashev for a back-hand empty-net goal and a 3-1 Blues lead with 1:12 left.