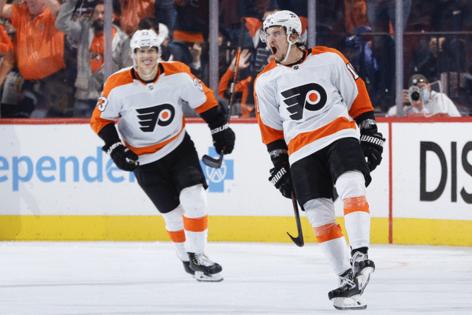 PHILADELPHIA — Finally, the Flyers have a shoot-first forward.

With the Flyers’ third game of the season against the Boston Bruins tied early in the third period, offseason acquisition Cam Atkinson scored the go-ahead goal off the rush generated when winger Joel Farabee picked off Bruins defenseman Mike Reilly in the neutral zone.

In the Flyers’ 6-3 win Wednesday night at the Wells Fargo Center, keeping the puck out of their own zone proved to be a challenge early in the game against a formidable top line of Brad Marchand, David Pastrňák and Patrice Bergeron, but the Flyers managed to stand strong through the storm.

The Bruins outshot the Flyers, 40-25. Regardless, the home team found a way to rattle Bruins goalie Jeremy Swayman and scored three goals in the third period.

Atkinson ultimately registered two goals in his third game as a Flyer. For the first time since Jan. 18, 2020 against the New Jersey Devils, the former Columbus Blue Jacket pulled off a multigoal game.

Jones holds it down

After coach Alain Vigneault started goalie Carter Hart in the Flyers’ first two games, he gave backup Martin Jones the nod. The contest against the Bruins marked Jones’ first start since the Flyers’ final preseason game on Oct. 8 against the Washington Capitals and his regular-season debut.

Early in the first period, Jones kept the Flyers in the game. The Bruins maintained possession of the puck and put three shots on goal within the first four minutes of the game. Jones let three pucks past him in the first and second periods, but to lump all the blame on Jones would be unfair — two goals were scored off tricky rebounds and another came on a breakaway from 2017-18 Hart Trophy winner Taylor Hall.

Through three periods, Jones stopped 37 shots and finished with a .925 save percentage.