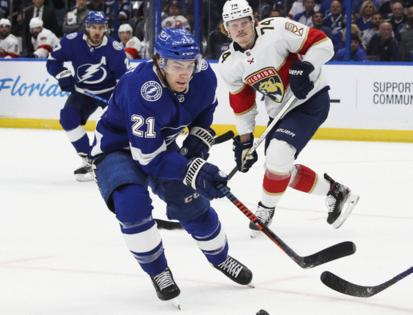 TAMPA, Fla. — When Nikita Kucherov returned last postseason, he gave the Lightning the most dangerous power play in the league.

With Kucherov — not only a threat to score but also possessing the rare ability to execute pinpoint passes to open teammates — running things from the right half wall, Tampa Bay’s power play became a pick-your-poison challenge.

Opponents had to commit to Kucherov but not collapse so much as to leave Brayden Point open in front of the net, allow Steven Stamkos to be available for a one-timer from the left circle or give Victor Hedman too much space above the circles.

But with Kucherov on long-term injured reserve with a lower-body injury, the Lightning’s power play is much different. And following an 0-for-6 showing, including a wasted 5-on-3 for 1:34, in Tuesday’s 4-1 loss to Florida, Tampa Bay quickly has to find ways to overcome Kucherov’s absence.

“A lot goes through ‘Kuch,’ so when you take a player out like that, I think there’s some settling that needs to be done,” said Lightning assistant Jeff Halpern, who coaches the power play. “And clearly (Tuesday) night, we were just on different pages and a little unorganized at times a little bit just on the plays themselves. It was something that probably should have gone better than it did.”

Even without Kucherov, who was recovering from offseason hip surgery, the Lightning managed to rank ninth in the league on the power play during the 2020-21 regular season. But Tampa Bay can’t simply resort to the same things it did a year ago.

“You can’t just slip right back into last year; it’s this year,” Lightning coach Jon Cooper said. “And we had ample more time to work on things beforehand. The power play without ‘Kuch’ last year, it actually was pretty darn good for most of the year. It slid probably the last month and a half or whatever, but power plays are going to do that. So, we will get that figured out.”

No matter who takes over Kucherov’s distributor role on the power play, the Lightning won’t be able to duplicate it. He has an uncanny ability to slow down the game and draws so much attention when the puck is on his stick, it allows his teammates to get open.

“Kuch, he does so many good things with the puck that a lot of times, he wants you to get away from him, and it takes a very skilled guy that can do that because he sucks guys in,” forward Alex Killorn said.

“But realistically, not a lot of guys can do that, and for our power play to be successful we have to support each other, something that we didn’t do a lot with Kuch, because he didn’t want us to support him. So we’ve just got to make some adjustments.”

The Lightning opened last season with Point in Kucherov’s spot but moved Ondrej Palat there for most of the regular season before Kucherov returned for the postseason.

Stamkos was the Lightning’s primary power-play weapon, scoring a team-high 10 goals with the man-advantage. But the unit slowed considerably when he missed the last month of the regular season.

In Wednesday’s practice, the Lightning put Point in Kucherov’s position along the half wall. Killorn was in the middle bumper spot in front of the net, and Corey Perry took Killorn’s place along the goal line.

Moving Point outside makes the middle less dangerous but spreads out the Lightning’s most potent weapons in Point and Stamkos. Without Kucherov on the right side Tuesday, defenses shifted more toward Stamkos in the opposite circle.

“When Pointer’s on the outside, it’s a different look,” Killorn said. “So I think that’s probably why they shoot a little more toward Stammer. We’ve just got to be supporting each other. We have one extra guy out there, so you have to find ways to 2-on-1 the PK.”

The Lightning will continue to try different combinations until they find one that works. In the meantime, the power play will be a work in progress. They don’t play again until Saturday, so there will be plenty of time to refine it.

“We start fresh,” Halpern said. “We have a lot of different guys who play that spot in different ways and will get looks and get time there, and we’ll see how that plays out.”

SAN JOSE, Calif. — Timo Meier was named to the NHL All-Star Game for the first time in his career last week. Now he has his first career five-goal game, setting a new San Jose Sharks record.

Meier had a hat trick in the...Read More

If only the Buffalo Sabres could be on the Red Wings' schedule more often.

The Wings took full advantage of the lowly Sabres, completing the season sweep Monday with a 3-2 overtime victory.

They shut out the Sabres on ...Read More

After falling behind by a pair of goals in the first period, the Wild responded with a gutsy rally before falling 4-3 to Colorado in a ...Read More