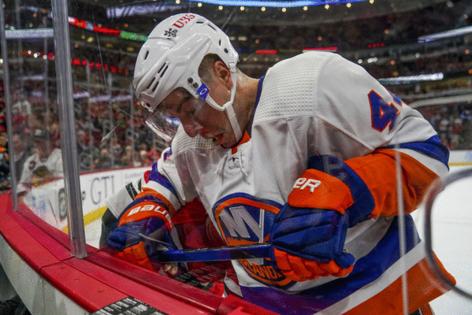 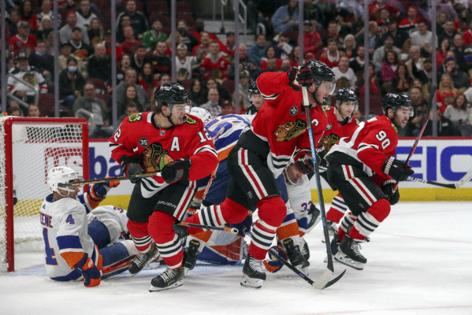 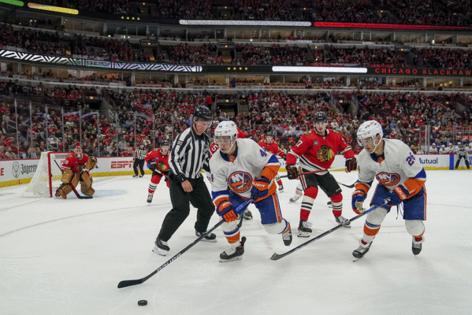 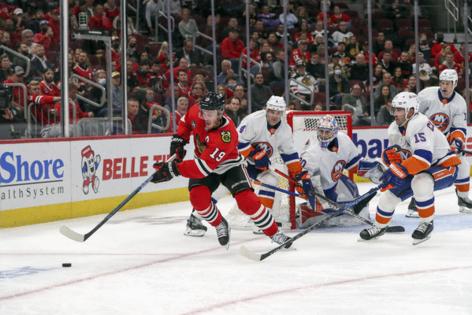 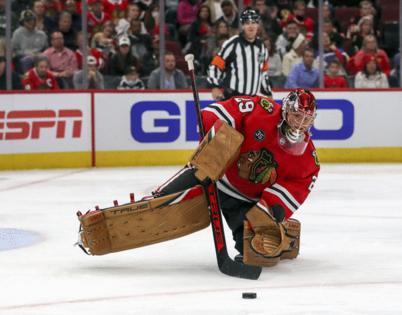 CHICAGO — The Chicago Blackhawks home opener began with a tribute to the late Tony Esposito and a standing ovation for Jonathan Toews, but the Hawks couldn’t cap off the night at the United Center the way they wanted to — with a win over the New York Islanders.

Both teams entered the game winless and desperate, but the Islanders scored three goals in the third period — two by Oliver Wahlstrom — to hand the Hawks a 4-1 loss Tuesday that dropped their record to 0-3-1.

The Hawks started last season with an identical record with all four games on the road, then won their home opener against the Detroit Red Wings.

MacKenzie Entwistle’s goal with 26 seconds to play saved the Hawks from their first shutout of the season. The play was reviewed for an offside penalty, but the goal was upheld.

Before it all unraveled in the third, the Hawks looked more like themselves — or at least what they were supposed to look like on paper — in their return to familiar surroundings.

Henrik Borgström had a standout first period, highlighted by a drag and drop to Alex DeBrincat that DeBrincat couldn’t put past Islanders goalie Ilya Sorokin.

Patrick Kane fed Seth Jones on a two-on-one, but Jones couldn’t capitalize either. The Hawks outshot the Islanders 18-9 in the first.

Entwistle and DeBrincat got great short-handed looks during a second-period penalty kill, but Sorokin stopped both.

Hawks goalie Marc-André Fleury appeared to settle in after a rough four-goal homecoming Saturday against the Pittsburgh Penguins.

Ultimately, the Hawks couldn’t stop Wahlstrom and they couldn’t solve Sorokin, who made 38 saves.

Wahlstrom outfought two Hawks for the puck from behind the Hawks net, and Anthony Beauvillier scooped and scored 4:08 into the second period for the first goal of the game.

In the third, Wahlstrom stole Borgström’s ill-advised pass in the Hawks defensive zone and slipped an angle shot through the five-hole 48 seconds into the period.

Wahlstrom added another goal 8 minutes later, and Cal Clutterbuck capped the Islanders scoring at the 11:06 mark.

TAMPA BAY, Fla. — In the Lightning’s third preseason game, coach Jon Cooper was impressed with his first glimpse of a new third line.