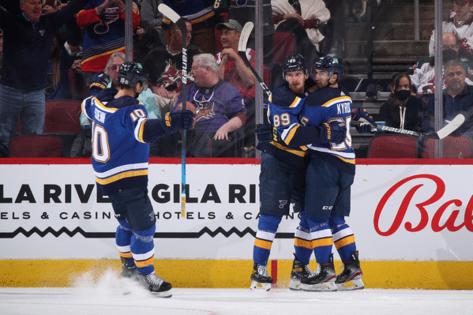 GLENDALE, Ariz. — For a while, this one looked all too familiar to the Blues when it comes to playing against Arizona.

Blues killer Clayton Keller scored the game’s first goal for Arizona. The Blues took some bad penalties (see: Pavel Buchnevich), and were having trouble with the Coyotes’ speed. But a second period outburst of offense gave the Blues a wild and crazy 7-4 win over Arizona that wasn’t complete until a Jakob Chychrun took a couple of cheap shots at Blues rookie Jake Neighbours, leading to all kinds of scrums with 3.2 seconds left in the game.

The Coyotes haven’t had much going for them in the standings in recent seasons, but the Blues have been a tonic. Since the start of the 2017-18 season, Arizona was 11-4-2 against St. Louis entering Monday’s contest a Gila River Arena.

Last season brought a particular brand of torture. Remember those seven consecutive Blues-Coyotes games last February? All told, the teams met eight times – and minus empty-net goals, all eight games were decided by one goal with Arizona going 5-2-1.

The Blues’ lack of success against Arizona almost cost them a playoff berth. Things looked eerily familiar for about half of Monday’s contest with the Blues down 2-1 and looking a little frustrated. Then things got a little crazy.

Starting with a power play goal by Justin Faulk, the Blues scored five goals in 5:07 to take a 6-2 lead.

That proved to be enough, but not before Arizona cut the lead to 6-4 with 11:37 left in the game, causing coach Craig Berube to call a timeout and give his players an earful. But Ivan Barbashev settled the coach’s nerves, at least temporarily, when his one-timer with 7:35 to play gave St. Louis a 7-4 lead.

The Blues, now 2-0-0, will close out this season-opening three-game road trip with a game Wednesday against the Vegas Golden Knights. Arizona fell to 0-2-1 after losing its home opener.

But it was a wild night almost from the outset. Let’s start with Pavel Buchnevich, who took a shot for his first goal of the season

And then took offense after Andrew Ladd took a shot at him.