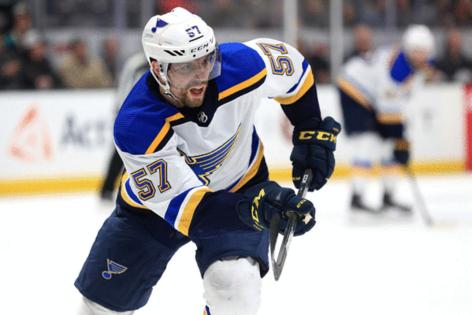 DENVER — They played eight preseason games, then waited around for eight days while the rest of the NHL played hockey games.

So to say the St. Louis Blues were anxious to get going would be understatement. It was worth the wait. The Blues opened the 2021-22 season on the right foot, defeating the rival Colorado Avalanche, 5-3, Saturday at Ball Arena.

The Blues were facing a depleted Avalanche roster, minus stars Nathan MacKinnon (COVID) and Gabriel Landeskog (suspension). But no sympathy from the visitors. Not with memories of getting swept in four games with a roster depleted by injury and COVID last season in the playoffs against the Avs.

All told, only 12 players who were in the Blues’ opening-day lineup last season – a 4-1 victory here over the Avalanche on Jan. 13 – were in the lineup Saturday for St. Louis. The new look worked out just fine for Game 1.

As much as the Blues said getting swept by Colorado in the playoffs was in the past, Brayden Schenn certainly remembered the check to the head of Justin Faulk by Nazem Kadri in Game 2. It knocked Faulk out of the game and out of the series. Kadri got a match penalty and an eight-game suspension.

Just 40 seconds in, Schenn dropped gloves with Kadri near center ice. It was a pretty even fight for a while, and then Schenn dragged Kadri to the ice and was on top of him before officials came in.

Less than four minutes later, look who scored the first Blues’ goal of the season? Faulk. He took a pass in the high slot from Jordan Kyrou and rifled a shot past Colorado’s new No. 1 goalie this year – former Arizona Coyote Darcy Kuemper.

So it was 1-0 Blues just 4 minutes 12 seconds into the season. Berube stressed the importance of not letting the Avalanche get off to a strong start Saturday. In its season opener Wednesday, Colorado led Chicago 3-0 just 9 1/2 minutes in.

The Blues got the memo. They controlled a lot of the early possession time, and didn’t let the Colorado lineup – however depleted – get much going in its transition game. The Blues killed off the period’s only penalty, an interference infraction against Robert Bortuzzo, and even though Colorado was buzzing around the St. Louis net when the period ended, the Blues had an 11-6 edge in shots on goal.