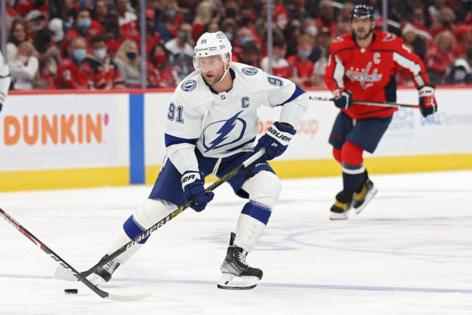 WASHINGTON — For the second time in three games, the Tampa Bay Lightning erased a third-period deficit to force overtime.

Two nights after erasing a three-goal, third-period hole in Detroit to win in extra time, the Lightning engineered more late heroics Saturday night for a 2-1 victory against the Washington Capitals. Steven Stamkos’ winning goal came with 14.2 seconds remaining in overtime.

The game was decided after the Lightning killed a fourth Capitals power play on the night. Mikhail Sergachev’s cross-checking penalty gave Washington a 4-on-3 in overtime.

Sergachev’s first goal of the season tied the score 4:23 into the third period. He zipped a snap shot from the left side of the blue line through an Anthony Cirelli screen in front of the net and past Capitals goaltender Vitek Vanecek. Sergachev, who spent the offseason honing his shot accuracy, gave the Lightning a boost then they needed it the most with one of his rocket deliveries.

Earlier in the third, star forward Nikita Kucherov hunched over in pain and disappeared down the tunnel toward the Lightning dressing room.

Much of the first two periods Saturday were scoreless.

Moments after their first power play of the game netted no shots on goal, the Lightning fell behind 1-0 with 1:09 left in the second period.

Capitals star Alex Ovechkin scored in open ice after the Lightning couldn’t clear the puck out of their own zone. Steven Stamkos couldn’t keep the puck on his stick, and Ovechkin came off the bench and swooped in, stealing it and launching a wrister from the high slot past Andrei Vasilevskiy gloveside.

The Lightning caught a break 15 seconds later when Ovechkin lit the lamp again, but the goal was taken off the board after video review. Ovechkin’s shot slipped between Vasilevskiy’s legs and to the goal line, but the review ruled that Vasilevskiy covered the puck with his glove before it crossed the goal line entirely, sending the crowd at the Capital One Arena into an uproar.

The Lightning also had a late first-period goal overturned when a Capitals challenge prompted officials to rule that the puck had gone off the netting — making it a deal puck — instead of off the glass when it kicked back to Alex Killorn positioned on the far post.

Killorn took an initial shot on goal from the slot, then found the puck on his stick behind Vanecek when he charged the net. Capitals coach Peter Laviolette challenged whether the puck was still alive when Killorn scored.

The Capitals’ fourth line of Carl Hagelin, Nic Dowd and Garnet Hathaway matched up against the Lightning’ top scoring line and frustrated it throughout the night. Ondrej Palat, Brayden Point and Kucherov had just three shots on goal through the first two periods.

Vanecek had 22 saves in the game, including 10 in a second period that saw a Tampa Bay surge.

He held his position during a sequence in front of the net that might have been the Lightning’s best scoring chance in the first two periods. Corey Perry weaved to the front of the net and Vancek denied his backhanded shot with a left pad save, then turned away a second effort from Perry while seated and stopped a third shot by Pat Maroon.

The Lightning played a good portion of Saturday’s game with just five defensemen. Jan Rutta missed parts of the first and third periods. Ryan McDonagh left after he was inadvertently hit under the left eye by teammate Erik Cernak’s stick blade in the second, but returned later in the period.

TAMPA, Fla. – The Blues were already in a run of games that wasn’t going to be easy. Two games with Tampa Bay, the two-time defending Stanley Cup champion, and then two games with Florida, which started Thursday with ...Read More

Erik Karlsson scored at the 39-second mark of overtime to give the Sharks a 2-1 victory over the host New York Islanders on Thursday.

Karlsson and Timo Meier went in on a 2-on-1 into the Islanders’ zone early into the ...Read More

After a two-game break, the ...Read More

The Panthers — also known these days as the “...Read More