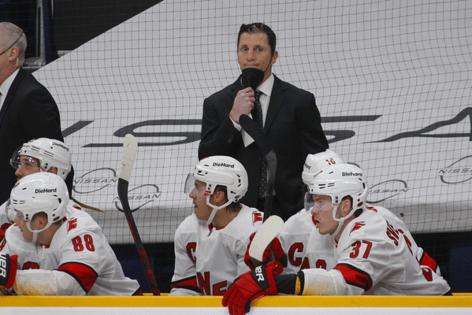 It’s October. The Carolina Hurricanes were opening a new hockey season. The New York Islanders were in the house for the start of an 82-game regular season, the two Metropolitan Divisions rivals going at it again.

“It seems like we’re as close to normal as we can be right now,” Canes goalie Frederik Andersen said leading up to the game.

Ernie Els back to defend title at SAS Championship

The Canes gave a sellout crowd much to enjoy, taking a 6-3 victory that started with Andrei Svechnikov scoring Carolina’s first goal of the season and then finishing it off with the sixth, a power-play empty netter. The special teams were sharp, the defensemen active and Andersen good enough in net in his first start.

The game had all the proper opening-night pomp and circumstance. Canes coach Rod Brind’Amour got a huge hand from Canes fans during the team introductions. No surprise there. Sebastian Aho, named an alternate captain this season, received another one.

Then they dropped the puck and what could be top of the best teams in the Metro battled it out.

Svechnikov, who had two goals and assist, had Canes fans at full throat when he scored and when he tried his lacrosse move behind the net in the third. Jesper Fast, Jordan Martinook and Nino Niederreiter also scored in a game that had a good pace and enough intensity as the Canes led 2-1 after the first and took a 4-3 lead into the third.

Teuvo Teravainen’s power-play goal in the third made it 5-3, the forward ripping a shot from the right circle off a Tony DeAngelo shot. There soon would be another season first: the first Storm Surge celebration after a victory.

The Canes signed Andersen — and goalie Antti Raanta — to give them more a veteran look in net and Andersen was given the first start by Brind’Amour.

The first meeting this season between the Kings and the Ducks felt like the good old days of seven or eight years ago, when both teams ventured deep into the Stanley Cup playoffs every spring and their every encounter was ...Read More

There will be no charges pursued stemming from the fireworks-related death of an NHL goalie at the Novi home of a former Red Wing during a July 4 celebration, the Oakland County Prosecutor's Office announced Wednesday.

ST. LOUIS — This game was a study in perseverance. Down 3-0 before they could break a sweat, the Blues chipped away to force overtime against the two-time defending champion Tampa Bay Lightning.

In a season that has had a lot of smiles and success, it has been a rough patch of days for the Carolina Hurricanes.

The Canes were on the road Tuesday, losing to the Dallas Stars 4-1 in a game in which they played hard ...Read More

DETROIT — As good as the Red Wings have been at Little Caesars Arena, it's been a different story on the road.

But Tuesday night, the Wings got a little something going away from home, as well.

Playing a patient and ...Read More

SUNRISE, Fla. — Sam Reinhart saw a sliver of space between Ilya Samsonov and the right pipe, and took his chance. Everything else had gone the Florida Panthers’ way in this dominant third period, so why not a shot into...Read More