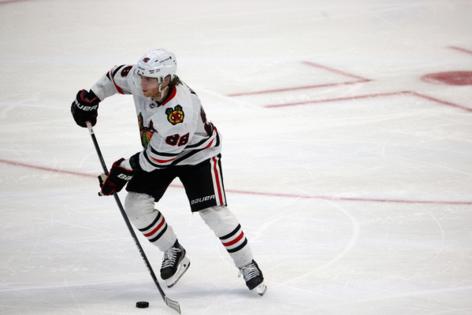 DENVER — The Colorado Avalanche raced out to three goals in the opening 10 minutes to send the Chicago Blackhawks to a 4-2 defeat Wednesday night at Ball Arena — the third straight season the Hawks have opened with a loss.

Dominik Kubalík and Connor Murphy accounted for the Hawks goals, but as a whole the visitors didn’t look ready to take a regular-season bow on prime-time national TV.

The Hawks set out to get bigger in the offseason, but it didn’t seem to matter when they were the ones taking many of the big hits, getting knocked off the puck or knocked to the ice.

Hawks management also made it its mission to improve the defense, bringing in new blood Seth Jones and Jake McCabe, but they were literally tripped up by coverage lapses.

McCabe appeared to trip on teammate Tyler Johnson’s skate and stumbled to the ice while trying to turn and defend Jack Johnson, who streaked through the neutral zone unchallenged and found himself one-on-one against Marc-André Fleury for the opening goal 4:26 into the game.

Gabriel Landeskog scored 1:22 later and Bowen Byram at the 9:34 mark.

The Hawks initially matched the Avalanche attack for attack, but Colorado’s speed soon turned possession into a lopsided affair, with the Avalanche maintaining a 76% Corsi-for percentage and battering Fleury with 17 shots on goal in the first 12 minutes.

The Hawks had two in that span and went more than nine minutes between shots on goal.

They settled down by the end of the first period, drawing a penalty with 4:30 left. The second power-play unit came through, with Ian Mitchell setting up Kubalík for a one-timer. Henrik Borgström also was credited with an assist.

Murphy banked in his third-period goal off the post from the blue line.

LAS VEGAS — It began not with a bang, but a wince — two goals yielded by the Seattle Kraken in the first 6 minutes and 36 seconds of its NHL existence.

Yet it was hard to dampen the euphoria of this night for Seattle,...Read More

LAS VEGAS — Kraken players not yet born the last time the city they represent boasted a professional hockey team had taken the ice here Tuesday night to showbiz glitz and star-studded pageantry.

TAMPA, Fla. — Entering the Lightning’s season opener against the Pittsburgh Penguins on Tuesday, coach Jon Cooper said the game would serve as a good measuring stick.

Instead, the 6-2 loss seemed like a reality check....Read More

TAMPA, Fla. — For a second straight season, the Lightning raised a Stanley Cup championship banner inside its home arena.

But unlike last year, when the banner was unveiled before the home opener but not hoisted until ...Read More

TAMPA, Fla. — Commissioner Gary Bettman, in town Tuesday to watch the Lightning’s season opener and Stanley Cup banner raising, said the NHL is intrigued and looks periodically at the possibility of holding an outdoor ...Read More

Flyers president of business operations Valerie Camillo feels a responsibility to set the right culture and establish a welcoming environment at the Wells Fargo Center — and she hopes the behaviors she expects are ...Read More