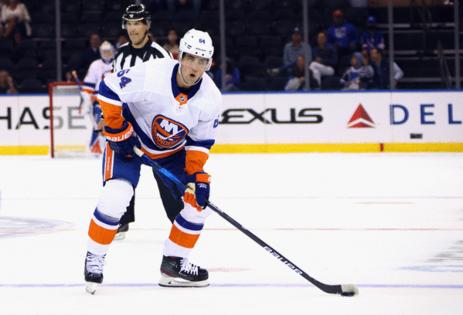 The Chicago Blackhawks signed Erik Gustafsson to a one-year deal with an $800,000 salary-cap hit Monday, bringing back the defenseman for a second stint with the team.

The Hawks have a history of bringing players back, but Gustafsson admitted he wasn’t expecting it when he heard from Stan Bowman, the Hawks president of hockey operations and general manager, on Friday.

“Me and my wife (were) talking about it sometimes, but no,” Gustafsson said. “But I’m right here now and I’m very, very excited. Very happy to be here.”

Coach Jeremy Colliton said he didn’t know if Gustafsson will play in the season opener Wednesday.

“We know him well and I know him well,” Colliton said. “He’s comfortable and excited to be here and he also understands what he’s coming into. Nothing’s been promised as far as what exactly his role is going to be, but we do think he can help and it’s kind of up to him.”

“Played with Kaner,” he said with a laugh, referring to Hawks star Patrick Kane. “No, I think it’s confidence. I moved my feet a lot and played strong every play I played on the ice. I know I can do it again. I know I can (score) maybe not 60 points, but I know I can produce.”

Gustafsson last played for the Hawks in 2019-20 before they traded him to the Calgary Flames for a 2020 third-round pick, which they spent on defenseman Wyatt Kaiser.

“When we traded him, it’s not because we didn’t like him,” Colliton said. “We had a chance to get a pick and didn’t look like we were going to be in (the playoffs) at the time.”

CALGARY, Alberta — Tristan Jarry came ready to play. His teammates did not.

It was arguably their worst performance this season. If not for Jarry, who made 31 saves, they might have lost 6-1. They were that bad and he ...Read More

BUFFALO, N.Y. — Leave it to forward Brandon Tanev to epitomize this winning Kraken stretch by stealing a puck at his own blueline and racing the length of the ice with an opponent draped all over him.

That Tanev, who ...Read More

For nearly 40 years, Mario Lemieux has been the heart and soul of the Pittsburgh Penguins. And he's vowing that won't change even as Fenway Sports Group takes over the team.

In his first comments since news broke that FSG...Read More