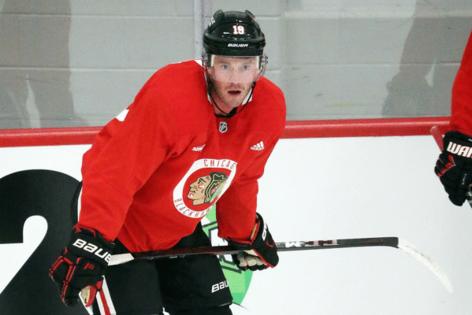 CHICAGO — The final decision is out of his control, but Chicago Blackhawks center Jonathan Toews feels he’s ready to play in Wednesday’s season opener against the Colorado Avalanche.

“I plan to play, but it’s not my decision, but I don’t think that’s up in the air,” he said after morning skate.

On Friday, coach Jeremy Colliton was noncommittal about Toews’ availability, saying “I think he’s responded really well. ... We still have some days left before Wednesday and we’ll go from there.”

Toews missed all of last season with Chronic Inflammatory Response Syndrome (CIRS), where his body responded adversely to any kind of stress, leaving him drained, lethargic and “you kind of feel like you’re in outer space sometimes.” Local experts who spoke to the Chicago Tribune in July said CIRS is “a multi-system, multi-symptom disorder, and it tends to be migratory” within the body.

Toews also has dealt with what he believes are long-hauler symptoms from a bout with COVID-19. He said he tested positive for antibodies.

He simultaneously announced his return and explained his illness in a June video on social media that showed him walking into Fifth Third Arena for workouts. But it hasn’t been smooth sailing.

Toews admitted he was “dog tired” after the first day of training camp, and he has called the tug-of-war with his health a “day-to-day thing.”

However, he’s been pleased with his progress.

“I just feel like I’ve taken a step almost every day.”