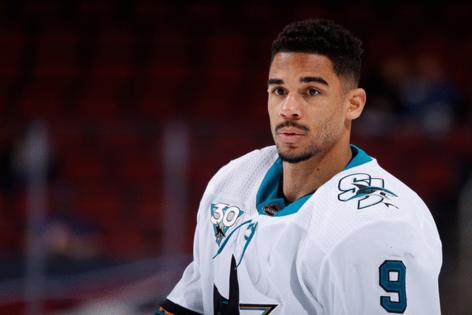 SAN JOSE, Calif. — When it came time for Kevin Labanc to provide proof that he had been vaccinated against COVID-19, the Sharks winger simply showed his CDC vaccination card to one of the team’s trainers and was on his way.

“There’s not much more to it than that,” Labanc said Wednesday.

The process is proving to be not as effortless for Sharks forward Evander Kane, who is facing two investigations by the NHL, including one for reportedly using a fake COVID-19 vaccination card.

Using or making a fake vaccine card is illegal in both the United States and Canada, and the NHL could issue sanctions against Kane if the investigation determines that he submitted a counterfeit card.

The NHL’s other investigation involves accusations of physical and sexual abuse raised by his wife in a recent court filing.

The Sharks must finalize their 23-man roster by Monday at 2 p.m. (PT), and there’s been no indication about how they will proceed with Kane, who remains on the team’s training camp roster.

“We haven’t talked about that,” Sharks coach Bob Boughner said Wednesday. “The guys here, that’s my main focus. (We’ve) got to wait until the investigation’s done, then I’ll have to sit, and obviously, we’ll have to talk and make some decisions.

“But as of right now, to be honest with you, there’s too much else going and too many other important things going on right now to have to focus on that.”

The NHL, like other pro leagues, did not require its players to receive the coronavirus vaccine. However, unvaccinated players face severe restrictions, including not being able to cross the border from the United States into Canada without a lengthy quarantine.