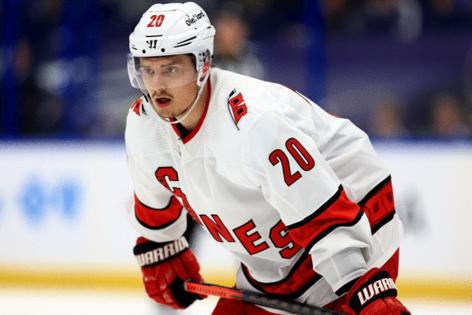 The pain and anger didn't go away quickly.

"I tried to use that fire in this offseason," Aho said Tuesday. "You've got to learn from those things. It's been three years now that we've had good years but not quite good enough and I truly believe those experiences will help us in the future. We just have to remember how it feels to lose."

Aho said that in an interview session at Wake Competition Center. No Zoom. No phone hookup. The Canes center came off the ice after an informal on-ice preseason workout with a group of his teammates, sat down on a bench and answered questions from a pair of reporters.

For the first time since September 2019, there was a sense of normalcy. NHL training camps will start later this month and the regular season in October. The Canes will return to the Metropolitan Division with a regular-season schedule comprised of 82 games.

So much changed during the coronavirus pandemic. Life has been anything but normal. The NHL's 2019-20 regular season was brought to a halt by the pandemic in March 2020, and the 2020-21 regular season did not begin until January 2021 and lasted 56 games.

In September 2019, Aho returned to Raleigh from Finland and answered questions about the offer sheet made to him by the Montreal Canadiens that summer. This September, he was asked about another offer sheet — the one made by Carolina to forward Jesperi Kotkaniemi of the Canadiens on Aug. 28.

The Canes matched the 2019 offer to Aho. The Canadiens, after taking their allotted seven days to make a decision, with zero media leaks, then passed on Kotkaniemi, not matching the offer, taking two draft picks in return and adding another young Finnish player to the Canes' mix.

Aho, 24, said he has never played in international competition with Kotkaniemi, 21, and does not know him well. He did say they "talked a little" after the offer sheet was made.

"I'm going to help him as much as I can," Aho said. "At the end of the day you have to just forget all that talk and keep doing what you do and play hockey. I'm sure he is going to help us a lot as a team. ... We got a great player out of it. That's my take on it."

Kotkaniemi, who was a restricted free agent, signed for a one-year, $6.1 million contract that includes a $20 bonus — 20 being Aho's jersey number and a bonus, Aho quipped Tuesday, he was willing to pay "if it comes to that."

In Aho's case, his 2019 offer sheet was for a five-year contract with an $8.454 million annual cap hit, with millions of dollars in front-loaded bonus money.

"Everyone knows when you signed that contract what can possibly happen," Aho said. "To me, I always wanted to stay."

Aho stayed with the Canes. Kotkaniemi, who has yet to get to Raleigh, will be with a new team and wearing a new number, No. 82.

Aho said with the seven-hour time difference in Finland, he was asleep soon after his offer sheet was announced, unaware of the drama being played out in Raleigh while Canes fans were fretting they might lose a star center and questioning why Aho had signed an offer sheet from Montreal. The next morning, Canes owner Tom Dundon said the Canes would match. Drama over.

Not so for Kotkaniemi.

"I guess it's a long week not knowing exactly what's going to happen," Aho said. "I was pretty confident with Carolina. Tom (Dundon) told me and the whole world that he's going to match right away, so I guess it wasn't too bad for me."

While Kotkaniemi is a newcomer to the Canes, there are others. Aho was on the ice Tuesday with defensemen Ethan Bear and Tony DeAngelo, Josh Leivo and Brendan Smith.

"A lot of the new faces but there's still a lot of the same, more familiar faces," Aho said.

No longer will there be defenseman Dougie Hamilton on the back end, looking to push the pace, get off shots and be a big part of the offense. Hamilton signed as a free agent with New Jersey, leaving Carolina for a big contract.

"It is all part of the business and I think we all knew there was a chance that he might not be here this year," Aho said.

Aho will be entering his sixth NHL season and has been a vital part of the franchise resurgence, with playoff appearances the past three years. One preseason ranking has him No. 21 among NHL players, as if he pays much attention to such things, to the outside noise.

He just doesn't want to be mad, again, when the season ends.

Six games into this young season, the Lightning have failed to play with the lead in regulation, and while there...Read More