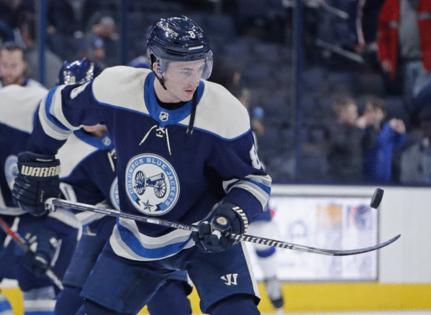 COLUMBUS, Ohio — In the summer of 2003, defenseman Darryl Sydor was traded from the Dallas Stars to the Blue Jackets and there was some fanfare to the deal.

Sydor was an old-school professional, a talented offensive defenseman and a winner. He was a "good guy in the room," as they say.

But those were the dark days of a young franchise run by Doug MacLean, who, at the start of the 2003-04 season, was the president, general manager and coach of the Exxon Valdez.

As dysfunction took its full grip and losses mounted, Sydor got this look. If you have seen the Edvard Munch painting, "The Scream," you know the look. "Face-melting" is one way to describe it.

MacLean did the right thing and wheeled Sydor to the Tampa Bay Lightning prior to the next trade deadline. Sydor, who won a Stanley Cup with Ken Hitchcock in Dallas in 1999, went on to win a Cup with John Tortorella in '04. MacLean went on to draft Alexandre Picard.

Players, prominent and not so prominent, come and go. It is the nature of the game. Just the other day, Jack Eichel's agents issued a statement which said, in essence, "The Buffalo Sabres promised that our client would have been traded by now."

Eichel's situation — which includes a hefty contract, a herniated disc and comedic decade of Sabres mismanagement — is complicated. It's an egregious example of how relationships can sour. But it happens.

They have lived through the Rick Nash soap opera, the exploding Jeff Carter experiment and the Artemi-Panarin-led mass exodus of 2019. Over the past year, they have watched Josh Anderson race to the exit, Pierre-Luc Dubois quit and Seth Jones say he wanted to test the market ("as is his right" is trite-but-true finish to the Jones clause.)

PITTSBURGH — What am I missing here?

The Penguins need a goalie, and the reigning Vezina Trophy winner, who happens to be a civic treasure in Western Pennsylvania, was just made available for ... let me double-check ...Read More

TAMPA, Fla. — The thorn in the Lightning’s side the past two postseasons now will be on their side.

The Blues have agreed to terms on a five-year, $22.5 million contract with free-agent forward Brandon Saad.

The move gives the team a desperately-needed left winger who will step in immediately to their top six.