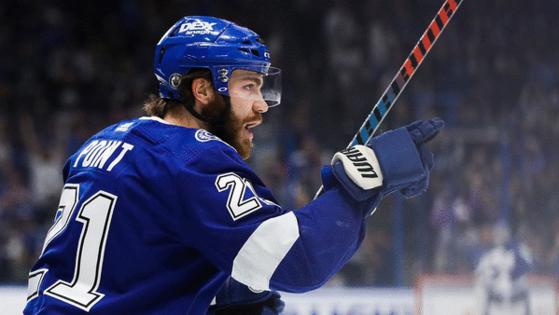 “Brayden is a key contributor to the Lightning’s success and one of the most dynamic players in the NHL,” BriseBois said in a statement. “To be able to agree to terms with him on a long-term contract is great news for our organization going forward. “Not only is Brayden a skilled player, he is also a fierce competitor who fits in well with the pedigree of our team. Our organization looks forward to having him be a big part of this team for many years to come.”

It’s not the first time the organization has extended a player’s contract a year before the existing one “expires.” Tampa Bay did so with Norris Trophy finalist Victor Hedman, Conn Smythe winner Andrei Vasilevskiy and playoff-leading scorer Nikita Kucherov in previous years.

Point agreed to his current contract, with a three-year, $6.75 million average annual value, in late September 2019, after the start of training camp. But offseason hip surgery delayed his return to the ice until late October anyway.

And since his second year in the league (2017-18), he’s finished in the top-three on the team roster in goal-scoring and points during the regular season. This past season, he led the team with 23 goals in 56 games.

His offensive production overshadows his grittiness on the ice. He gets to the high-scoring areas, fights for position and works well in small spaces. And every year, he just seems to get “better and better,” Blake Coleman said this past postseason.

Point’s game-winning goal against Florida in the opening game of the playoffs, his second of two in the game, was one of the biggest moments of the postseason, head coach Jon Cooper said. It was reminiscent of his winner in the fifth overtime of the Tampa Bay’s opening-game victory over Columbus in the 2020 postseason.

“You know games springboard your playoffs, and ironically it was Pointer that scored in the five overtimes (against the Blue Jackets), but it just created a mojo with our team,” Cooper said. “We ended up winning that second game and then that series, and it kind of almost catapulted us.”

Six games into this young season, the Lightning have failed to play with the lead in regulation, and while there...Read More

The Carolina Hurricanes scored three times in the second period in surging to a 4-1 victory over the Leafs at PNC Arena, staying ...Read More

ST. LOUIS — To make everyone’s life easier in the 2020-21 NHL season, the league scheduled games in pairs last season, so a team would come to one city and play two games.

It was not a great thing for the Blues, who ...Read More

It doesn’t matter who’s in goal, who’s missing from the lineup or who the opponent is. The Florida Panthers keep rolling.

They spent the first two weeks of the season mostly beating up Stanley Cup contenders and ...Read More

For a minute, it seemed as though those cheers might last clear through the intermission. The crowd at Climate Pledge Arena had been waiting 19 minutes and 57 seconds for it, the city of Seattle a whole lot longer.