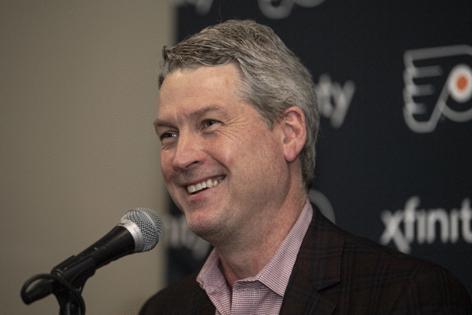 Here a second-rounder, there a seventh-rounder.

Some of the draft picks may turn out to be solid NHL players, or better. Others may never make it to the Big Show, or never make much of an impact.

Fletcher, in a departure from his predecessor -- Ron Hextall loved to stockpile extra drafts picks -- had his own bold plan, one that included the following principles:

3. Get some new leaders into a locker room that had grown stale.

And, so, he became the NHL’s most active general manger over the last week, acquiring a scorer with an in-your-face mentality in Cam Atkinson, and defensemen Ryan Ellis and Rasmus Ristolainen, veterans who play with an edge.

TORONTO — Timo Meier and Logan Couture continued their early-season chemistry together and Adin Hill had another solid night to lead the San Jose Sharks to their biggest win so far this year.

PITTSBURGH — Over the last six-plus weeks, Sidney Crosby has made consistent progress as he recovers from left wrist surgery. But the injury itself, and the nagging effects, date back much further.

“The first time I ...Read More

As coach Jon Cooper says, banners are for the fans and rings are ...Read More