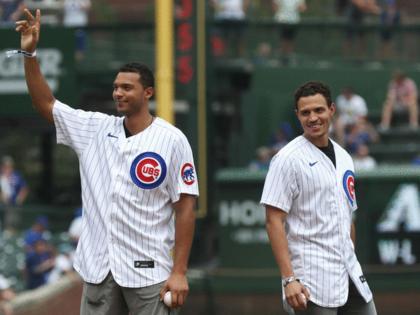 “Usually I would get real mad and try to slash him or something,” Caleb, 24, said. “He was always the calm one.”

“You see the scratch on his nose? That happened last week,” said 26-year-old Seth, sitting next to Caleb while both of the new Chicago Blackhawks defensemen spoke with reporters on a blazing Saturday afternoon during a quick cruise on the Chicago Fair Lady.

“He got me with an elbow,” Caleb said.

“He says it was accidental; I don’t know,” Caleb said.

It was a weekend for sibling rivalry — and solidarity — as a series of Hawks maneuvers in the draft and trade market in the last two weeks reunited Seth and Caleb Jones on the same team for the first time in their careers — and brought Kirby Dach’s younger brother, Colton, into the Hawks’ system.

They join what is a pretty healthy history of Hawks fielding brothers on the same roster.

The Hawks went all-in on Seth Jones, regarded as one of the NHL’s top-10 defensemen. They sent Adam Boqvist, first- and second-round picks this year (12th and 44th overall) and a conditional first-rounder in 2022 to the Columbus Blue Jackets for Jones, a late-first-round pick (No. 32) and a sixth-round pick in 2022.

That was half of the equation.

The Hawks and Jones also agreed to an eight-year, $76 million extension with a hefty $9.5 million annual cap hit.

Seth touted the history of the organization and the chance to play with the likes of Patrick Kane and Jonathan Toews and added he admires president of hockey operations and general manager Stan Bowman.

Bowman said Friday that Seth Jones can mentor the Hawks’ crop of young defensemen — including Caleb — and Seth agrees.

“And I’m still learning — I’m 26 going on 27, so by no means have I hit my peak (yet),” Seth said. “But for Caleb, just bringing experience. I can hopefully play in all situations, power play, penalty kill and do a good job for the team. Whatever the coach asks me to do, I want to do to make this team better.”

The Hawks traded for Caleb Jones last week in the deal that sent Duncan Keith to the Edmonton Oilers. Bowman downplayed the notion that Caleb was a sweetener to lure Seth into signing a long-term deal.

“Certainly, Caleb had nothing to do with the trade,” Bowman said. “Maybe he had something to do with telling Seth he should sign with the Blackhawks — I don’t really know that part of it. But we like Caleb. He’s just coming into his own as well. We’ve got some young defensemen, and he’s going to supplement that group. It’s certainly a great story to have the two of them here.”

Caleb knows he has to make his own way to stick around.

“They have a lot of guys that are my age,” he said Saturday. “I’ve actually played more games (93) than a lot of the young guys they have, so (Bowman) thinks I can bring a little bit more experience..

On Day 2 of the draft Saturday, Colton Dach knew something was up. He just had to look at big brother Kirby.

“He knew a little bit before, texted my buddy (and) they were looking at each other and smirking,” Colton said.

The Hawks selected the Colton Dach in the second round, 62nd overall, after a season in which he had 11 goals and nine assists in 20 games for the WHL Saskatoon (Saskatchewan) Blades in 2020-21.

“We’re excited to get a chance to play together,” Colton said. “I see myself more as a power forward. I’m a bigger guy who likes to use his body. Biggest difference, (Kirby is) pass-first and I’m a shoot-first player.”

Colton, 18, underscored how he and the other draft picks aren’t finished products.

Other brothers in Hawks history

The Hawks have had several pairs or groups of brothers playing on the same team over the decades.

Max and Doug assisted on Reg’s only NHL goal, which he scored during a road game against the New York Rangers on Jan. 3, 1943.

Phil and Tony Esposito both played for the Hawks, but they missed each other in Chicago by three seasons.

After four consecutive comeback wins to open the season, becoming just the fourth team in NHL history to accomplish that rare feat, the Wild's ...Read More

The Sharks fell from the ranks of the unbeaten Sunday after they failed to start on time in a matinee at TD Garden in Boston.