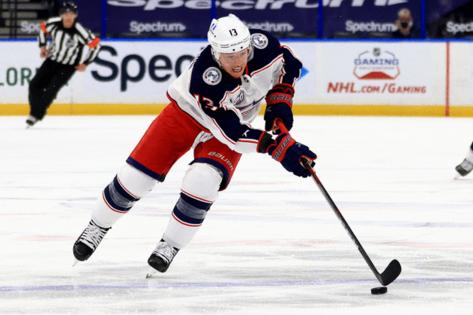 In an exchange of highly productive right wingers, they acquired Cam Atkinson from Columbus and sent Jake Voracek to the Blue Jackets. The Flyers acquired Voracek from Columbus in 2011, and he had 10 strong seasons in Philadelphia.

Besides his goal scoring, he should aid the Flyers’ penalty kill and power play. Atkinson had four short-handed goals last season, tied for second in the NHL.

“I’ve been here a long time and I love Columbus, but I couldn’t be more excited to join the Flyers’ organization,” Atkinson, wearing a Gritty T-shirt he borrowed from his wife, said in a Zoom call with reporters.

Atkinson said the changes general manager Chuck Fletcher has made will pay dividends. Changes, he implied, can invigorate players.

“I think my energy alone is really going to help the team,” he said before attending his three-year-old son’s birthday party.

Atkinson played at Boston College with Flyers center Kevin Hayes, and is also friends with James van Riemsdyk and Claude Giroux. He is also close with former Flyer Scott Hartnell.

Hartnell “just rants and raves about what a special place Philly is,” Atkinson said. “As you can see I’ve already got my Gritty shirt, so I’m ready to rock and roll.”