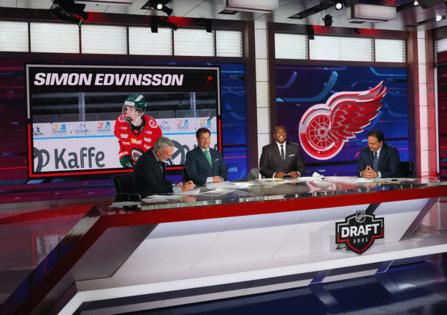 The 6-foot-5, 207 pound Edvinsson played 24 games for Frolunds and Vasteras in Sweden, and has been compared to Tampa defenseman Victor Hedman because of his size and mobility.

Edvinsson likely needs another year or two in Sweden before coming over to North America.

Scouts feel Edvinsson is further ahead defensively than offensively, but like many of his intangibles.

Michigan boasted the top two picks in the draft, with defenseman Owen Power going No. 1 overall to the Buffalo Sabres, and center Matty Beniers going No. 2 to the expansion Seattle Kraken.

Powers was the prohibitive favorite to be the top pick and he was.

A mobile, 6-foot-5 defenseman, who also starred for Canada at the men's world championships after the regular season, Power is expected to attend Michigan for one more season before graduating to the Sabres.

Beniers was widely considered to be the best all-around center in the draft. Beniers, too, is likely to attend Michigan for another season before joining the Kraken organization.

With the third pick, the Anaheim Ducks selected center Mason McTavish, a big, two-way center who many mock drafts had dropping to the Red Wings.

But the Ducks, in a rebuild similar to the Red Wings, couldn't pass up the chance to select McTavish, who has been praised for his character and leadership.

The New Jersey Devils selected fourth and took defenseman Luke Hughes, the younger brother of Jack Hughes who is starring with the Devils (and Quinn Hughes, who is with Vancouver).

It was widely considered the Devils would select Hughes, who is a 6-foot-2 elite skating offensive defenseman, an area of need for the Devils.

Right before the Red Wings, with the fifth pick, the Columbus Blue Jackets — who earlier in the day traded defenseman Seth Jones to Chicago — took center Kent Johnson, the third Michigan Wolverine to go in the first five picks, a first in the draft's history.

Ironically, four of the top five picks in the draft could be at U-M next season. Luke Hughes is a commit to the Wolverines, and also plans on playing in Ann Arbor next season.

SECAUCUS, N.J. — The Chicago Blackhawks were in the market for a big-ticket defenseman, and they landed one in a blockbuster draft-night trade Friday, acquiring four-time All-Star Seth Jones from the Columbus Blue ...Read More