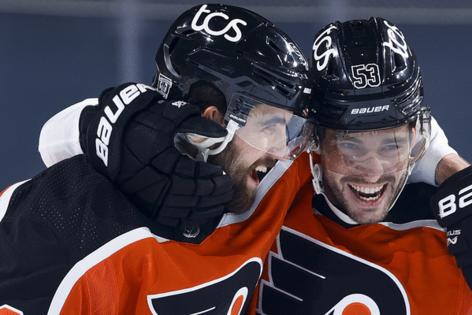 The Flyers had to give the Coyotes second- and seventh-round draft picks in 2022 to take the puck-moving player they call “Ghost.”

The Flyers desperately needed cap space in a flat-cap world, and Gostisbehere has a 4.5 million annual cap hit for the next two seasons.

“This was a difficult decision, but one we thought was necessary given the reality of the salary cap,” Flyers general manager Chuck Fletcher said. “Shayne has been a quality player for this organization since the moment he arrived in Philadelphia and has been a part of many special moments in his seven seasons as a Flyer.”

Contacted on his cellphone, Gostisbehere did not want to comment.

Assuming Cam York, Wade Allison and Morgan Frost make the team, the Flyers now have $70.3 million of their $81.5 million (maximum) committed to 19 players. That leaves them with 11.2 million — up from $6.7 million — in cap space, and they still must sign restricted free agents Carter Hart, Travis Sanheim, and a backup goalie.

Gostisbehere, 28, burst into the NHL and finished second in the rookie of the year voting in 2015-16. He has had an up-and-down career since that season, but he bounced back from knee surgery and had nine goals in 41 games this year. He showed signs of being his old self.

Yet, there were no takers when he was placed on waivers during last season. Most thought he would draw some interest at some point this summer, when teams have more cap flexibility than during a season.

But Fletcher pulled the trigger.

The progress shown by York, a player with similar skills and someone who can also run a power play, made Gostisbehere expendable.

Gostisbehere has played parts of seven seasons in the NHL, all with the Flyers. He posted 219 points (60 goals, 159 assists) in 381 regular-season games, and also appeared in 17 playoff games, recording five points.

Last season, Gostisbehere ranked second in scoring among the team’s defensemen with 20 points (9 goals, 11 assists) and led the Flyers defense in goals (9) and power-play goals (5).

Gostisbehere led the Flyers defensemen in scoring in his first four full seasons, and he was a two-time winner of the Barry Ashbee Trophy as the team’s best defenseman (2016, 2018) as voted by the members of the Philadelphia Hockey Writers Association and members of the Flyers broadcasting crew.

His 219 points are fifth all-time by a defenseman in Flyers history, while his 60 goals are fourth.

Gostisbehere was selected by the Flyers in the third round (78th overall) of the 2012 draft, and in 2014 he helped tiny Union College stunningly win its first national title. In the NCAA championship game held at the Wells Fargo Center, he was plus-7 as Union whipped Minnesota, 7-4.

COLUMBUS, Ohio — The Blue Jackets have agreed to a five-year, $27 million contract extension with goalie Elvis Merzlikins, which the team announced Tuesday.

Merzlikins, 27, has split time in net the past two seasons ...Read More