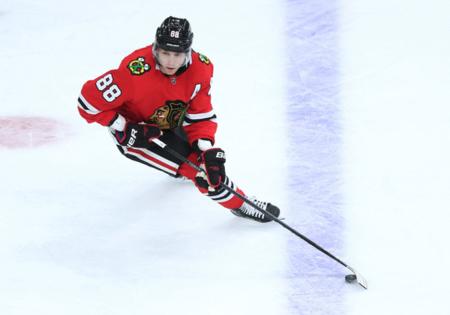 In helping to schedule a preseason game between the St. Louis Blues and Chicago Blackhawks for Oct. 2 at Cable Dahmer Arena — home of his minor league Kansas City Mavericks — he's putting that notion to the test again.

The two NHL teams announced the matchup this week with release of their preseason schedules. The 5,800-seat arena in Independence will play host to a big league game this fall. Previous NHL exhibition games took place at the T-Mobile Center, formerly known as the Sprint Center.

KC's last preseason game, between the Blues and Minnesota Wild, was played at the downtown arena on Sept. 28, 2017.

Hunt held a news conference at Cable Dahmer Arena Tuesday to speak about the announcement, crediting his history of working with the Blues for ensuring the negotiations went smoothly. He noted that tickets will likely go on sale in "mid-to-late August," noting that he expects fervent demand with Cable Dahmer Arena's limited capacity.

"I think it was just the belief of both organizations, whether it's the Mavericks or the Blues or both of us, that we could do this and we could actually make it happen," Hunt said. "I would call it a very fair business deal for both parties."

Hunt, who bought a 100% ownership stake in the Mavericks in 2015, has spoken often about his goal of advancing the sport in Kansas City. This year marked the 12th for the Mavericks, who play in the third-tier ECHL. They've overtaken the Kansas City Blades (1990-2001) as the city's longest-running pro hockey team.

Hunt said NHL games, even exhibition ones, bring in brands and recognizable names, such as the Blackhawks' Patrick Kane and Blues' Vladimir Tarasenko. He hopes such ventures will broaden hockey's support here.

"We have a relationship with the Blues ... and I think this is the fruit of that," he said. "I think we've satisfied the things that we need to do, that we can put it on and do a great job with it. This is going to be great for the community of Kansas City to see this up close and personal like this and see how exciting this sport is."

The Blues made the playoffs for the third straight year after winning the Stanley Cup in 2019 but were swept in the West Division's first round by the Colorado Avalanche. Chicago, meanwhile, placed sixth in the Central Division and missed the playoffs for the third time in four seasons after a nine-year playoff streak that included three Stanley Cups.

Kansas City hasn't had an NHL team since the the Kansas City Scouts played here from 1974-76. Tumultuous ownership, poor play and low attendance contributed to team's exodus and eventual rebirth as the New Jersey Devils.

"There will definitely be scarcity of tickets," Hunt said of the Oct. 2 exhibition game. "There will be tremendous demand, and I want to emphasize that we only have about 5,800 seats, so that I think is going to create great optics. It's going to be a great spectacle, even though it's going to only be in the sense of a preseason game."

CHICAGO — A law firm hired by Ohio’s Miami University to investigate a former Chicago Blackhawks video coach’s brief time on the Ohio campus found the public institution was unaware of prior allegations of improper ...Read More

White it’s a common drill, it represented the latest step in ...Read More

The embattled Blues forward sat down for a brief — and I mean brief —Zoom interview after Thursday’s first day of training camp knowing he was about to face plenty of questions ...Read More