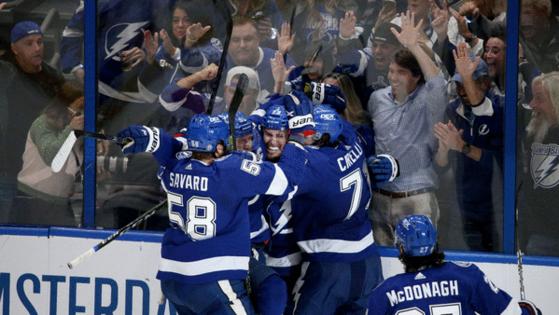 TAMPA, Fla. — The day after his goal sent the Lightning to a second straight Stanley Cup championship, Ross Colton was riding in the passenger seat of Pat Maroon’s golf cart, parading the Cup around Davis Islands.

Any ride with Maroon — who showed during last year’s Cup celebration that he’s a capable Pied Piper of parades — can be an adventure. But it was at that moment, riding with the Cup and the man who has been most acquainted with it over the past three seasons, that the moment truly hit Colton

“Just soaking it in with all the fans, that was kind of the moment for me that really made it click that, ‘Wow, we’re Stanley Cup champions,’ ” Colton said. “You’re sitting there with Patty Maroon, back-to-back-to-back (Cup winner), it was unbelievable for me. I was soaking it all in.

“I felt like I was almost in a fantasy being a part of it with him.”

Just hours earlier, Colton scored the only goal in the Lightning’s title-clinching Game 5 win over the Canadiens in the Stanley Cup final. On a team full of players who were part of last year’s championship team, it was ironic that the two who weren’t — trade deadline acquisition defenseman David Savard, a 10-year veteran, and Colton, a 24-year-old rookie who began this season in the AHL — were the ones who connected on Wednesday night’s winning goal.

“There’s honestly no real words to describe it,” Colton said. “Just such an unbelievable feeling and just to be a part of it, is so special for me and I thought everyone played their best 60 minutes of the year and, honestly, I’m still speechless.”

Colton spent most of his season battling alongside Maroon for pucks, doing dirty work on the Lightning’s fourth line. But he has a flair for the dramatic. He scored his first NHL goal on his second shift of his first game Feb. 24. When filling in for the injured Barclay Goodrow on the Lightning’s third line, he scored two goals in the first-round series against the Panthers. And he scored the biggest goal of his career Wednesday night playing on the Lightning’s second line, replacing injured forward Alex Killorn.

“Ross kind of does it all,” Lightning forward Blake Coleman said earlier this postseason. “He’s a hard worker. He’s got a shot. He’s a playmaker.”

In the middle of Wednesday night’s on-ice celebration, Colton’s first call was to his mother, Kelly, who was back home in Robbinsville, N.J., unable to fly in for the game because she had the flu.

“She’s my biggest fan, my support system,” Colton said. “I wish she was here to celebrate with us, but she was my first call on the ice and she was crying. That was really special for me.”

CHICAGO — A law firm hired by Ohio’s Miami University to investigate a former Chicago Blackhawks video coach’s brief time on the Ohio campus found the public institution was unaware of prior allegations of improper ...Read More

White it’s a common drill, it represented the latest step in ...Read More

The embattled Blues forward sat down for a brief — and I mean brief —Zoom interview after Thursday’s first day of training camp knowing he was about to face plenty of questions ...Read More