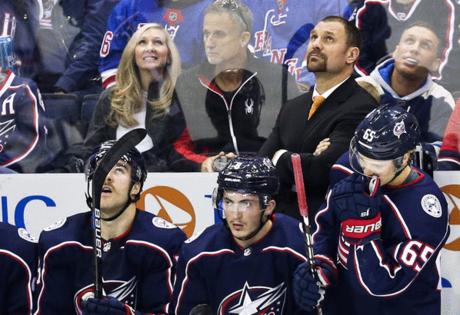 Larsen, 43, will now run the Jackets' bench in his first opportunity as an NHL head coach after serving as an assistant the past seven seasons for both John Tortorella and Todd Richards. The team announced Larsen's hiring Friday, making him the eighth coach in franchise history and capping a search process that included interviews with more experienced candidates, including Gerard Gallant and Rick Tocchet.

Like those two, Larsen is a former NHL forward. He and Tocchet both won the Stanley Cup in their playing days and have firsthand knowledge of what it takes to attain that goal. Unlike Tocchet and Gallant, Larsen has never been an NHL head coach. His lone chance to a professional bench was for two seasons with the Springfield Falcons, the Jackets' former affiliate in the American Hockey League.

That wasn't a concern for the Blue Jackets' management team, which is again led by both John Davidson, the recently re-hired president of hockey operations, and general manager Jarmo Kekalainen. Instead, Larsen's familiarity with the Blue Jackets, for whom he has worked the past 11 years, won out.

"We underwent an exhaustive process in which we looked very closely at a number of outstanding candidates to be the next coach of the Columbus Blue Jackets and the one individual we kept coming back to throughout was Brad Larsen," Kekalainen said in a statement. "Brad was one of the top young coaches in the American Hockey League when he joined our club as an assistant coach and over the past seven years has earned the respect of our players, staff and organization with his work ethic, hockey acumen and the way he treats people, and we couldn't be more pleased to introduce him as our next head coach."

Said Davidson: "Brad understands the standard that has been set here in recent years for how we expect to play on the ice and how we represent our city and fans off the ice. He shares our values and our vision for what it means to be a Blue Jacket and where we want to go as a franchise and is the right person to lead our team moving forward."

After ending his 13-year playing career in 2010, he began his coaching journey in 2010-11 with Springfield. Starting out as an assistant there, Larsen ascended to the head coach role after two seasons.

He had a lot of success, going 92-45-15 and winning two Northeast Division titles in his only two years at the helm. Before trying for a third, Larsen was promoted to Columbus on June 16, 2014, as an assistant to former Blue Jackets head coach Todd Richards.

Tortorella was hired Oct. 21, 2015, replacing Richards after an 0-7-0 start to 2015-16, and he inherited five assistant coaches, including Larsen. The only one who didn't return was Craig Hartsburg, who was replaced by Brad Shaw. Larsen, former goaltending coach Ian Clark, skills coach Kenny McCudden and video coach Dan Singleton all stayed in their roles.

Clark was replaced by Manny Legace after 2017-18, but Larsen, Shaw, McCudden and Singleton were around for the entirety of Tortorella's six-year term. McCudden, Legace and Singleton are still on staff, while Shaw, surprisingly, wasn't retained nor was he granted an interview to become Tortorella's replacement.

PITTSBURGH — It's fair to criticize Jake Guentzel for his lack of production in the playoff series against the New York Islanders. He had 25 shots on net but produced just one goal for the Penguins in the six-game ...Read More

RALEIGH, N.C. — During the most critical moments of the Lightning’s second-round series opener against Carolina, defenseman Ryan McDonagh found himself in a tough situation.

RALEIGH, N.C. — The Lightning emptied another road arena on Tuesday night, and turned out the lights on the Carolina Hurricanes.

Tampa Bay is back among the NHL’s final four teams, advancing to the Stanley Cup ...Read More

DETROIT— Those who watched the Red Wings religiously this season know it to be true. And it’s been the case for the last couple seasons, for sure.

The Wings have trouble scoring goals.

The Florida Panthers have agreed to terms with top prospect Anton Lundell on a three-year, entry-level contract.

Lundell, 19, was selected 12th overall in the first round by the Panthers in the 2020 NHL Draft.

Tampa Bay coach Jon Cooper respects the Carolina Hurricanes’ penalty killing, calling it among the most aggressive and effective in the league.