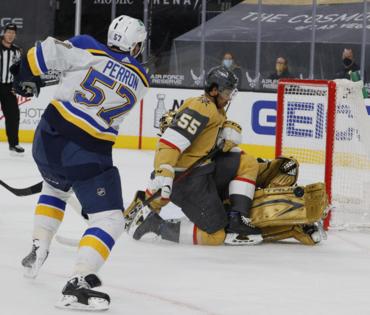 LAS VEGAS — On the day after clinching a postseason slot, Craig Berube talked about the need to maintain intensity and good habits.

“I think it’s really important,” Berube said pregame Saturday. “This game for me is still a big game. We might face this team in the playoffs. We need to go play our game and play ’em hard.

“They’re gonna play because it’s important for them, the points, and things like that for their standings. First place. So they’re gonna be a competitive team and we gotta match it.”

And then the game started. One team looked like it was playing for first place in the West Division — that would be the Vegas Golden Knights. The other team looked like it had nothing to play for — that would be the St. Louis Blues. Having wrapped up a playoff berth in Friday’s 4-3 overtime loss, that was the case for the Blues. They’re locked into fourth place, marking time until the postseason.

So perhaps it’s not surprising that the team closing in on first place won 4-1 Saturday at T-Mobile Arena.

The Blues fell to 24-20-9 and their season long eight-game points streak (5-0-3) came to an end. They finished the regular season 2-4-2 against Vegas. They’ll have to do much better than that to survive their likely first-round playoff series with the Golden Knights.

At 39-13-2, Vegas moved one day closer to wrapping up the West Division title. Colorado remains four points back and Minnesota five back. The Golden Knights and Avalanche have three games remaining; Minnesota just two — both against the Blues this week.

It took 16 minutes — 16 — before St. Louis had its first shot on goal. By that time Vegas already had a 2-0 lead. And with Marc-Andre Fleury in goal — you know, the third-winningest goalie in NHL history — things looked pretty good for the West Division leaders.

The Blues were sloppy from the start, with passes that misconnected and wall battles that were lost. About 81/2 minutes in, Alex Tuch picked Marco Scandella’s pocket as Scandella was trying to skate up ice not too far in front of the Blues' net.