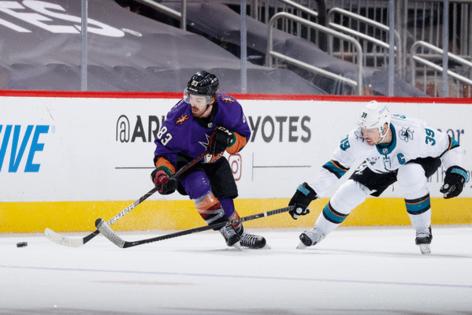 Kessel scored at the 2:30 mark of overtime, beating Melnichuk with a wrist shot to give the Arizona Coyotes a 5-4 win over the San Jose Sharks at SAP Center.

Alex Barabanov got that goal back with 48.1 seconds left in regulation time, taking a pass from Tomas Hertl next to the Coyotes net and scoring his third of the season.

Melnichuk made 25 saves in regulation time.

The Sharks and Coyotes were tied 3-3 after two periods.

Melnichuk stopped 16 of the 17 shots he faced in the second period. The only shot to get by him was one from Coyotes rookie forward Jan Jenik, who roofed a shot from a sharp angle over Melnichuk’s shoulder pads an just under the cross bar to tie the game 3-3 at the 6:20 mark of the third period.

Timo Meier had given the Sharks a 3-2 lead, as he skated in from the wing and tucked a shot around Adim Hill at the 5:26 mark of the second period for his 12th of the season.

Melnichuk allowed two goals to Dvorak in the first period but didn’t have much of a chance on either.

With the play at 4-on-4, Dvorak shook off Brent Burns inside the Sharks’ zone along the boards, turned toward the middle of the ice and fired a wrist shot from the slot that beak Melnichuk high glove side at the 3:32 mark of the first period.

Later in the first, six seconds after Jeffrey Viel was assessed a minor penalty for unsportsmanlike conduct, Dvorak, stationed near the faceoff dot to the right of the Sharks net, one-timed a pass from Christian Fischer past Melnichuk for a 2-1 Coyotes lead at the 11:36 mark of the first.

Kevin Labanc got that goal back less than four minutes later, heading up the ice on a 2-on-1 with Erik Karlsson and beating Coyotes goalie Adin Hill with a wrist shot high glove side for his 12th goal of the season.

Melnichuk, who signed with the Sharks a free agent out of the KHL a year ago, is thought to be one of the brighter prospects in the Sharks’ system even though he has had an up-and-down season with the Barracuda. In 17 AHL games, Melnichuk has a 7-7-3 record with a .868 save percentage.

In his last AHL start on Monday, a 5-3 Barracuda loss to the Bakersfield Condors, Melnichuk allowed five goals on 19 shots as a personal three-game winning streak came to an end.

The numbers don’t jump off the page. But Sharks coach Bob Boughner said he spoke with Barracuda coach Roy Sommer earlier this week to get a better feel of how Melnichuk has been playing recently.

“He said he’s a fighter, he’s a battler and he’s had some good games and not so good games, but he’s a guy who comes to work hard every day,” Boughner said. “This is an opportunity for him (Saturday) night to get his first start.

“He’s gone through a lot, starting in the KHL and then coming over and being on the taxi squad for a while and then going down in the American League. So it’s nice to see him get a start.”