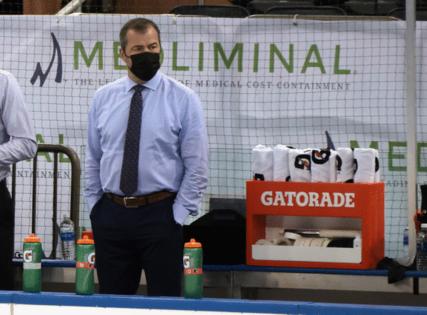 Collectively, the Flyers will not be feeling good about this season once it ends on Monday.

But personally, Alex Lyon should.

Lyon was a wall for most of the night, but the Washington Capitals scored late in regulation and again in overtime to escape with a 2-1 win Saturday night.

Lyon, an unrestricted free agent after the season, had stopped the Capitals' first 36 shots before Lars Eller forced overtime with a goal with 40 seconds remaining. Lyon finished with 38 saves.

“It would have been good for Alex to get another win,” coach Alain Vigneault said, “but unfortunately we weren’t able to get the job done.”

The Capitals needed to win in regulation to stay alive in the division race. Instead, Pittsburgh won it. Boston and the Islanders clinched the final two playoff spots.

Scott Laughton’s third-period laser was the game’s first goal as offense was hard to come by on the choppy ice at Washington’s Capital One Arena.

The short-handed Capitals were forced to dress just 17 skaters when stars John Carlson and Nicklas Backstrom were scratched shortly before faceoff. Alexander Ovechkin missed his third consecutive game and seventh of the last eight.

Among Lyon’s better saves was a stop on Carl Hagelin, who had gotten free midway through the second period. He also stopped Eller in overtime and Justin Schultz on a one-timer just before Eller’s regulation goal.

The most newsworthy items to come out of the first two periods were injuries to a couple of the Caps' top players. Tom Wilson returned from a scary, knee on knee collision with Nic Aube-Kubel. But T.J. Oshie did not. He also got tangled up with Aube-Kubel and seemed to be favoring a hip or groin as he skated gingerly back to the bench.

The Flyers will conclude their season on Monday when New Jersey visits the Wells Fargo Center.