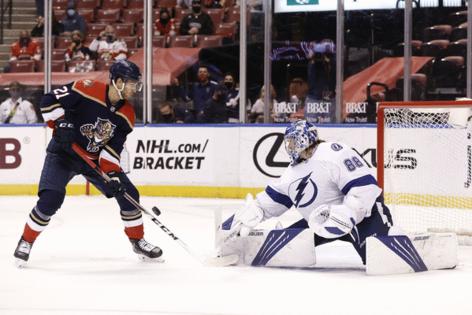 SUNRISE, Fla. — This certainly wasn’t the way the Lightning wanted to begin their upcoming string of games against the Panthers.

The Lightning were outmanned and outplayed in a 5-1 loss to the Panthers on Saturday night at the BB&T Center, and while there were stakes, the upcoming meetings between these teams will be much more meaningful. They’re first-round playoff opponents after all.

And their absence was well noted, as the Lightning were forced to play a much more defensive game with so many players forced into unfamiliar roles. Typically on the right side, Luke Schenn played on the left side. Fredrik Claesson made his Lightning debut, paired with trade deadline acquisition David Savard, who was playing his 13th game with Tampa Bay. With four games of NHL experience under his belt, rookie Ben Thomas was called on to play.

Regardless, the Lightning played their second straight sub-par game.

Panthers forward Alex Wennberg recorded a hat trick, his third goal coming with 6:22 left in the third period on a puck that Andrei Vasilevskiy couldn’t track.

Vasilevskiy allowed a season-high five goals on 35 shots. He seemed to get caught off guard by Wennberg’s wrist shot from the right circle, which went just under his blocker with 8:16 left in the first period. On the power play, Aleksander Barkov set up Sam Bennet for a wrist shot in the slot that beat Vasilevskiy top shelf gloveside 3:07 into the second period..

After the Lightning responded when Schenn jumped up into the slot to take a feed from Yanni Gourde to cut the lead to 2-1 4:52 into the second period, the Panthers took a two-goal lead again on the strangest of plays.

Skating behind the net, Wennberg looked to put the puck in front of the net, but his pass hit off Savard’s skate and shot into the air. Vasilevskiy couldn’t find the puck as it took a crazy backspin in the air and landed behind him and in for a goal. Defenseman Erik Cernak tried to bat the puck out of the air, but whiffed.

Jonathan Huberdeau’s back-handed shot from the slot, which capped the Panthers’ three-goal second period, was another shot that Vasilevskiy typically would stop.

Both teams were looking to establish their physicality in a game full of pushing and shoving and jawing after the whistle. Schenn and Ryan Lomberg exchanged punches during a second period that ended with several scrums after the buzzer. The teams combined for 32 penalties, including four game misconducts.