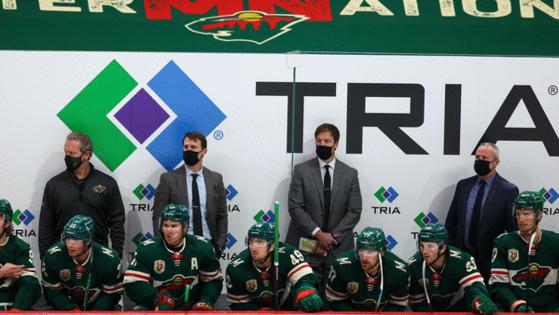 ST. PAUL, Minn. — Rookie standout Kirill Kaprizov has been dazzling lately as a goal scorer, but he reminded everyone on Saturday that he's also a skilled playmaker.

After scoring in overtime the night before, Kaprizov's encore included two slick passes before the Wild needed overtime to once again outlast the Ducks, 4-3, during the team's regular-season home finale.

Victor Rask scored with 2 minutes, 14 seconds left in overtime, spoiling Anaheim goalie Ryan Miller's final game of his NHL career, after Max Comtois tied the game at 3 with 26 seconds left in the third period to send the Wild to their fifth overtime finish in the last six games.

Miller is retiring, exiting the league as the all-time NHL leader in wins among U.S.-born goalies with 391. He's also the only player in hockey history to be named the top goaltender in the NCAA, American Hockey League, Winter Olympics and NHL.

After the game, Wild players lined up to shake hands with Miller, whose family was on hand at Xcel Energy Center. Miller made 21 saves against the Wild.

Miller was sharp early, and the Ducks went ahead 1-0 at 12:02 of the first period when Rickard Rakell deflected a a Josh Mahura point shot by Wild goalie Cam Talbot.

Before the period was up, the Wild tied Anaheim at the tail end of a four-minute power play after Joel Eriksson Ek was high-sticked. Kaprizov took a Kevin Fiala feed into the offensive zone and skated toward the net before dropping the puck to captain Jared Spurgeon for a redirect that rolled by Miller.

The goal was Spurgeon's ninth point in as many games, and Kaprizov hit the 50-point plateau with the assist while pushing his point streak to a career-high six games. Kaprizov has five goals and five assists during that run, and he's the first Wild rookie to record three point streaks of five-plus games in a single season. The last NHLer to accomplish the feat was Vancouver's Elias Pettersson in 2018-19.

As for Fiala, his assist was his eighth point over his last six games and gave him 40 points on the year.