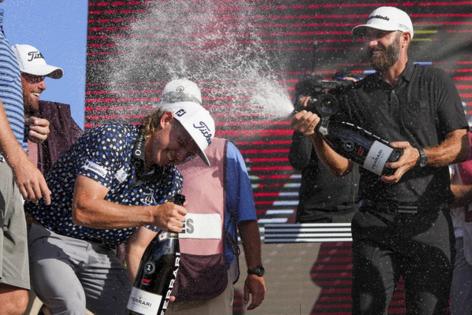 Donald Trump stepped up to the tee at the first hole at the Trump National Doral, drove his ball down the fairway and gazed back at the crowd behind him. “Can Biden do that?” Trump asked. “I don’t think so!”

As his round continued, Trump fans shouted words of encouragement at the former president. “Keep up the fight for America!” one said. “We love you 45!” another said. “47!” someone else yelled, causing the crowd to cheer.

The following day, Oct. 28, Trump and his fellow amateurs stepped aside, ceding the course to the professionals of LIV Golf, the controversial new league, which was there for the final event of its tumultuous first season.

The mood at the outset was jubilant — part carnival, part sporting event, part Trump rally. A woman on stilts, dressed as a flamingo, showered fans with bubbles. Nearby, Eric Trump, the former president’s son, signed autographs. “Make some noise, Miami!” an announcer bellowed.

For the LIV Golf executives in attendance, there was a lot to celebrate and fret over as they wrapped up the season. In less than a year, they had poached some of the world’s best golfers from the PGA Tour while plunging the once-polite world of golf into a nasty civil war.

So far, the league has proven to be much more adept at generating noise than at making money. Despite many efforts, LIV Golf is still not on US television. Instead, it streams tournaments on YouTube, where the audience is much smaller and less desirable to advertisers. Forbes estimates LIV will generate less than $75 million in revenue this year. The PGA Tour is expected to generate about $1.5 billion, according to a spokesperson. Some sports industry experts don’t expect LIV Golf to ever be profitable.

“I don’t see how you get remotely close to a business number where you’re not going to lose your shirt,” said Michael Payne, a former strategic adviser to Bernie Ecclestone, who built Formula One into an empire.

The executives and players of LIV Golf are aware of such skepticism but say the future is bright. During a pre-tournament press conference at Doral, Phil Mickelson said it was “pretty remarkable” how far LIV Golf had come in less than a year, an oft-repeated mantra of the league’s insiders.

Since its inception in June, LIV Golf’s 48 players, including stars like Mickelson and Dustin Johnson, have competed as individuals — and also, notably, as teams with names like Fireballs, Smash and Crushers.

Currently, Saudi Arabia’s sovereign wealth fund, which holds more than $600 billion in assets, has made a reported $2 billion investment in LIV Golf. But the long-term strategy is for each team to become its own self-sustaining business, generating revenue from tournament purses, merchandise and sponsors.

The most lucrative event of LIV Golf’s inaugural season came to an end on Sunday in Doral. It was also the final event of the controversial Saudi Arabia-funded league’s season.

When it was done, the total prize pool ...Read More

SAN DIEGO — Jon Rahm bagged his first tour victory at Torrey Pines. He won a major here. Including the 2021 U.S. Open, Rahm’s treks up and down the North and South courses accounts for $5.25 million of his $39.6 ...Read More

SAN DIEGO — It says it right there in the PGA Tour bio of Max Homa: “Favorite city is San Diego.” Now we’re talking. There’s someone near the top of the leaderboard at the hallway point of the Farmers Insurance ...Read More