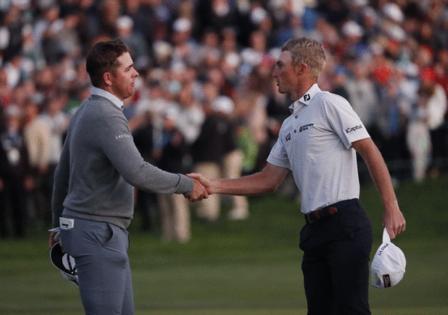 SAN DIEGO — No one could blame PGA Tour stops like San Diego's Farmers Insurance Open for sounding internal alarm bells amid reports of the PGA Tour increasing purse sizes at select tournaments and requiring elite players to play in those.

The Farmers isn't panicking, though. Not yet, anyway.

In the wake of a Golf Digest story explaining how tournament directors of some events became as heated as potted lobsters at the idea, the mere suggestion of broadening the haves and have nots week by week jarred.

What does it mean to us? How many top golfers of our past will not be a part of our future? Is this the first step in trimming events from the schedule?

As the gold-plated voice of The Golden Bear Jack Nicklaus shared with the Associated Press, "What it's done is made the PGA Tour almost two tiers. All of a sudden, the other tournaments become feeders."

There's a well of confidence for a place like Torrey Pines and a tournament like the Farmers to draw from, though, as the Tour pumps in money to counter the threat of LIV Golf departures. It's not just another tournament.

To cast Torrey and the Farmers as a simple face among the stick-swinging crowd would be like describing Del Mar as just another racetrack or the San Diego Zoo as a run-of-the-mill animal park.

The Farmers, with breathtaking cliffside vistas framing gliders soaring above the bobbing blue of the Pacific, is a destination. Torrey Pines South is a U.S. Open-caliber course and massively needed early season test as top golfers shake off cobwebs.

The most lucrative event of LIV Golf’s inaugural season came to an end on Sunday in Doral. It was also the final event of the controversial Saudi Arabia-funded league’s season.

When it was done, the total prize pool ...Read More

SAN DIEGO — Jon Rahm bagged his first tour victory at Torrey Pines. He won a major here. Including the 2021 U.S. Open, Rahm’s treks up and down the North and South courses accounts for $5.25 million of his $39.6 ...Read More

SAN DIEGO — It says it right there in the PGA Tour bio of Max Homa: “Favorite city is San Diego.” Now we’re talking. There’s someone near the top of the leaderboard at the hallway point of the Farmers Insurance ...Read More

SAN DIEGO — Golfers like to pull a few blades of grass and toss them into the air to gauge the wind before hitting a shot.

That would explain any grass floating in the Pacific Ocean during Thursday’s second round of ...Read More