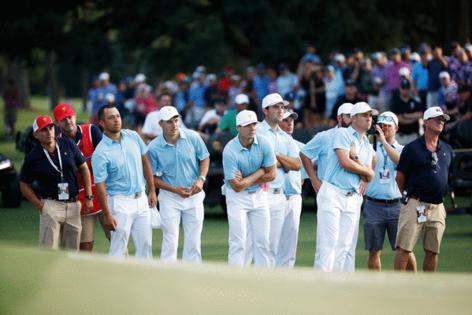 CHARLOTTE, N.C. — The heavy favorites came to play early, but the underdogs didn’t leave without a fight.

What began as an anticlimactic rout — Patrick Cantlay and Xander Schauffele ended their round up six with five holes to go — turned into a nail-biter that might be consequential later in the week.

The heavily favored Americans won four matches and lost one, ultimately escaping Quail Hollow Club on Thursday with a 4-1 lead over the International side heading into Friday.

“Going out first, there’s a real advantage to trying to get red up on the board as early as possible,” Cantlay told reporters after his round. “I think it just gets everyone a little more comfortable and inspires them to just follow suit.”

One of the biggest storylines leading into this year’s Presidents Cup was the supposition that the event could be one-sided. The U.S. team has won 11 of the 13 iterations of the tournament and hasn’t lost since 1998. Not only that: The LIV Tour has rendered many of the international side’s potential stars, including third-ranked Cameron Scott and 33rd-ranked Louis Oosthuizen, ineligible — tipping the scales even further in America’s favor.

But the International side, after a sluggish start, made a valiant comeback.

And made Thursday chock-full of big moments.

The biggest shot of the day for the U.S., perhaps, came on hole 15. To save par, Justin Thomas carefully nudged a long putt from the fringe. When it fell into the cup, he fist-pumped to a roaring crowd and slapped Jordan Spieth’s hand and shouted, “That’s what I’m talkin’ about!” The International team missed the ensuing putt and had to settle for bogey — and that gave the Spieth-Thomas pair a two-stroke lead and a momentum it wouldn’t relinquish.

Another big moment came on hole 10, a par three, for the American squad. Collin Morikawa slipped a 6-iron out of his bag and rocketed a shot off the tee about five feet away from the hole. (“Not a bad 6,” Morikawa told his caddie, trying to suppress a big smile.)

That good shot didn’t lead to a birdie or any change in margin, after Morikawa’s partner, Wake Forest grad Cameron Young, missed the ensuing putt. But it was a highlight from a solid day from Morikawa — and Young eventually got his partner back, which included a beautiful approach from the rough to help hold par and the lead on 15, as well as a match-sealing putt on 17.

CHARLOTTE, N.C. — You know what Charlotte really needs, and what the U.S. Presidents Cup team can help us all out with this weekend?

Charlotte’s sports fans would like to stop getting ...Read More

Those storylines took a front-row seat on ...Read More