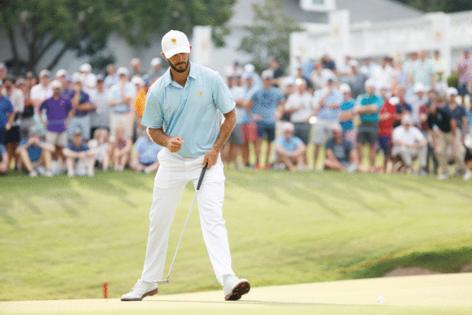 CHARLOTTE, N.C. — You know what Charlotte really needs, and what the U.S. Presidents Cup team can help us all out with this weekend?

Charlotte’s sports fans would like to stop getting battered by a hurricane of bad news and actually start celebrating a few wins in a row.

Tuesday was a fine beginning, as the city of Charlotte landed the ACC headquarters, snatching it from Greensboro. That was a big deal for our city, albeit one drawn up in corporate boardrooms.

But what we also need is a win on the field of play. That’s where the Presidents Cup at Quail Hollow Club can come in, as 12 of the best American golfers face 12 of the best international golfers Thursday through Sunday in the biennial match play tournament that will be played in Charlotte for the first time.

The U.S. is favored, and rightly so, although it may be worth pointing out that the Carolina Panthers were also favored over Cleveland in their home opener.

The U.S. Presidents Cup Team has five players in the world top 10 in its lineup. The International Team doesn’t have any Top 10 players, in part due to substantial LIV Golf defections.

This is a little like a 3 seed playing a 14 seed in the first round of the NCAA men’s basketball tournament.

And yet we all know the upset stories — shoot, our city literally hosted the first-ever men’s 16-over-1 seed upset in 2018, when UMBC stunned Virginia in March Madness. And what Charlotte really doesn’t need this weekend is to host something like that. Charlotte needs a victory by the home team.

I mean, c’mon. We need this. The 0-2 Panthers, who will play New Orleans at home Sunday while the Presidents Cup is concluding at Quail Hollow, haven’t won a game at home in a calendar year.

Those storylines took a front-row seat on ...Read More