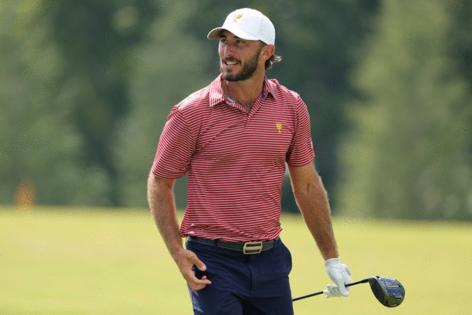 OK, that might be a tad generous, but his popularity underscores the United States team’s distinct advantage at the Presidents Cup at Quail Hollow this week.

Homa, who has campaigned as hard as anyone in the past year to be on this team, arrived at the practice range early Tuesday morning with a wide smile.

“Hey, champ!” some onlookers called. “Congratulations” was a popular refrain.

Homa earned his fifth PGA Tour win this past weekend at the Fortinet Championship, the first event on the 2022-23 PGA Tour calendar. Four of his five wins have come in the past two-plus years, and showcases the depth of this year’s U.S. team. Sure, he’s a rookie at the Presidents Cup, but he’s playing about as well as anyone in the world at just the right time.

“Yeah, he’ll get a chance to play,” U.S. captain Davis Love III deadpanned. “I think we have a rule that everybody has to play once before Sunday, so we’ll have to put him in there.

“No, I’d say there’s a lot of highlights already for me, and we haven’t played yet. But one of the highlights was Mack Horton from our team took luggage carts and went and met Max and his entourage about 2 in the morning to get him to the hotel. So that was really cool.”

Homa admitted the gesture was much appreciated.

“That was really super nice of them. They did not have to do that,” Homa said. “It was like, 2, 2:30 in the morning. He helped us with all our bags, showed us to our room. … It just goes to show what type of guy he is, obviously an amazing golfer, great captain, but very, very great human being.”

Homa was among the 12 U.S. players who took to the range, practice green and surrounding areas early Tuesday before finding his way to the course at Quail Hollow. Heavily favored, the team isn’t practicing like it.

SUGAR GROVE, Ill. — Bryson DeChambeau is one of the most recognizable faces in golf and one of the LIV players involved in the antitrust lawsuit against the PGA Tour that bars defectors from competing in its events.

DFW’s two major PGA Tour stops aren’t exactly sure how the competition between the Tour and LIV Golf will affect their respective tournaments, but there will be a cut line.

Neither the Charles Schwab Challenge at ...Read More