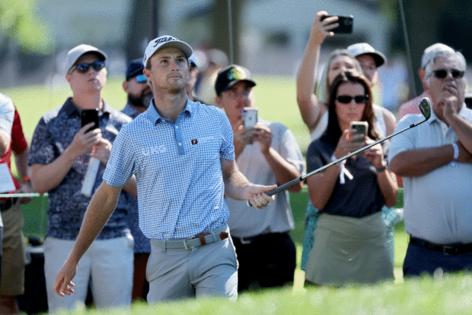 GREENSBORO, N.C. — There was very little weeping in Greensboro for the departed mercenaries who took the LIV Tour’s blood money, few of whom had ever contributed much to the Wyndham Championship. Phil Mickelson would rather fold pocket kings than show up at Sedgefield Country Club in August. Dustin Johnson, Brooks Koepka and Bryson DeChambeau might as well not exist during the final week of regular PGA Tour play before the FedEx Cup playoffs begin.

As for the few who do have connections, Sergio Garcia, who won in 2012 and made three semi-happy returns, will be missed. Patrick Reed is another past champion, but no one’s ever been sad to see the back of him. Henrik Stenson won in 2017, came back to defend and then never again.

For the most part, the sets that contain the LIV Tour’s has-been retreads and the kind of players who make the Wyndham a priority do not overlap, with the exception of the occasional struggling veteran who has tried to straggle his way into the playoffs at the last minute and shown up looking vaguely lost in an unfamiliar place.

Future stars get their start

It’s what Hideki Matsuyama, Justin Thomas, Cameron Smith, Jon Rahm and Colin Morikawa have in common, aside from winning majors, and how locals like Akshay Bhatia, Chesson Hadley, Viktor Hovland, Doc Redman and Will Zalatoris got their feet through the tour door. They played the Wyndham on sponsor’s exemptions, and not by accident.

“We’ve tried to establish this tournament as the place where you can learn who Cameron Smith is because we gave him a spot several years back,“ said Mark Brazil, the former tournament director and now CEO of its charitable foundation. “Guys like that. We’re always bringing in three or four of the next great young players on the planet and showcasing them.

“They don’t get a lot of time during the tournament but once you start watching what they become – the biggest year we’ve ever seen of this was Matthew Wolff and Morikawa and Hovland all quickly getting their card, all were here the same year (2019) along with Doc Redman from Raleigh. We’ve always tried to do that. We’ve introduced a lot of great players here. This tournament, back in the old days, introduced Seve Ballasteros as a very young man who kind of reshaped the game of golf, certainly in Europe.”

This year’s crew includes Joohyung Kim, a 20-year-old South Korean who played his way into temporary tour status this summer, NCAA golfer of the year Chris Gotterup in his sixth PGA Tour start, former top amateur Cole Hammer and Trent Phillips, a star at Georgia who won the 2017 AJGA tournament at Sedgefield and is making his first pro start.

They’re the other half of what makes the Wyndham unique, along with the locals and natives and past champions: The very old (Davis Love III, 58, playing for the 25th time while also scouting ahead of captaining the U.S. President’s Cup team in Charlotte this fall), the very successful (Webb Simpson, who’s made more money in this tournament alone, $3.7 million, than most pros make in a career) and the very close to Michael Jordan (Harold Varner III, who wears Jumpman gear and is in the conversation with Tommy Fleetwood and Cameron Tringale for best active veterans yet to win a tour event).

They provide a backbone of familiar faces, year after year. Meanwhile, without the current biggest names in the game, who are resting up for the big money over the next three weeks – other than that one dizzying week in 2015 when Tiger Woods showed up and the world seemed to revolve around Greensboro for four days – the Wyndham has done an exceptional job over the years identifying some of the game’s best future biggest names, up-and-coming players who don’t have tour status but might repay a chance to play on a sponsor’s exemption with their loyalty in years to come.

“With Webb and Brandt (Snedeker) and so many others, Ryan Moore, who have won their first tournament here, we’ve always kind of prided ourselves on who’s next,” Brazil said. “That puts us in a real good spot right now combatting the things that are going on over at the Saudi (LIV) tour.”

There’s an art and science to that. Brazil came to the Wyndham with deep roots in junior golf, including the important American Junior Golf Association tournament held at Sedgefield, and like a baseball scout he’s been watching some of the game’s best young talent emerge behind the scenes, off the radar. Sometimes, they’re easy to spot. Others, Brazil has been watching, assessing and considering for years – placing his own bets on players others might overlook.

The idea is not only to improve the field with raw, if unpolished, talent but build the kind of relationships that will keep players coming back. There are mixed results there – Hovland, Morikawa and Rahm were one-and-done, but Matsuyama has come back six times and Smith three, although not this year.

And Zalatoris, 14th in the world, is in Greensboro this week even though he played in Detroit last week, often an either-or choice for the players who even decide to play those weeks. Zalatoris is a Wake Forest product, but unlike Simpson and other natives, he’s originally from Texas.

Zalatoris got started on tour in 2018 with a sponsor’s exemption to the Wyndham, then got another last summer when he still hadn’t earned full status because of COVID disruptions. His loyalty to the Wyndham didn’t come naturally. It was earned.