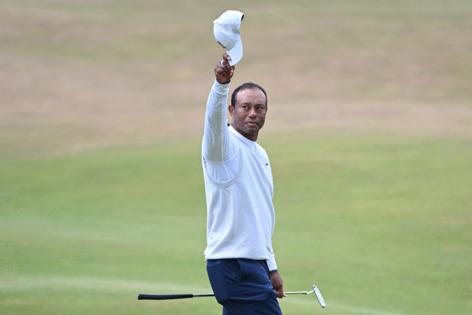 Woods, 46, rejected the offer and has openly ripped the LIV tour. Previous reports had said only that Woods turned down an offer in the high nine figures.

“That number has been out there, yes,” Norman told Fox News’ Tucker Carlson. “Tiger is a needle mover. So of course you got to look at the best of the best. They had originally approached Tiger before I became CEO.”

Woods has consistently criticized the Saudi-funded tour, most recently in July before the British Open.

Carlson was interviewing Norman because last weekend’s LIV event was played at a Donald Trump-owned course in Bedminster, N.J. Also attending were 9/11 survivors and victim’s families, who blasted Trump and the LIV golfers for taking money from Saudi Arabia despite the nation’s reported involvement in the attacks. Fifteen of the 19 9/11 hijackers were Saudi nationals.

“We’re standing in the backyard of where people were turned to dust,” said an emotional Brett Eagleson, gathered with other protesters. “This is the worst form of greed and of evil. The golfers and the former president are cowards.”