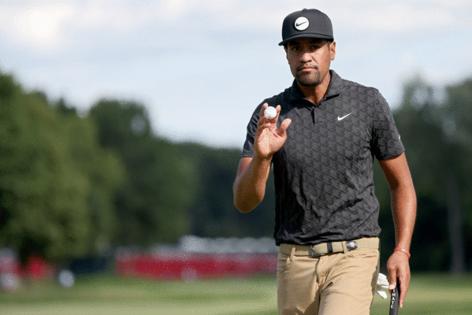 Time will tell if one or both will play in September at Quail Hollow, but during the third round of the Rocket Mortgage Classic, Finau, the highly ranked American looking for back-to-back victories, and Pendrith, the relatively unknown Canadian looking for his first win, went back and forth over 18 holes, the momentum swinging multiple times before they walked off the 18th green tied for the lead at 21 under.

“Yeah, that's golf,” Finau said. “It's almost like a match play situation where we kind of flipped the script there on each other in the beginning. I think we both have done a great job up to this point through 54 holes of maintaining our composure and playing good golf. It was nice to have him as a playing partner today and we'll have him again tomorrow.

“It had a nice feel to it, a lot of energy from the crowd and we both played some solid golf and kind of feeding off each other. It was nice to have that type of energy and we'll run it back (on Sunday).”

If what the duo runs back on Sunday is anything like what they produced on Saturday, then it should provide for plenty of theater.

And if anyone else can join the party — say, Cameron Young or Patrick Cantlay, who both threatened at times on Saturday — then all the better.

For now, though, the focus is on Finau and Pendrith. Finau had the better round, shooting 7-under 65 to pull even with Pendrith, who entered the round with a one-shot lead before carding a 6-under 66. While it seems straight forward, it was an adventure getting to the end with the pair neck and neck.

Finau grabbed an early advantage with birdies on two of the first three holes to grab the lead.

“Obviously, this course has shown some low scores, so you've got to just keep making birdies if you want to stay in it,” Pendrith said. “I got off to a decent start today. I missed a short one on 3 — maybe a little nerves — but hung in there.”

He did, indeed, retaking the lead with birdies on Nos. 4, 6 and 8 before a bogey at No. 9 left Pendrith and Finau tied when they made the turn.