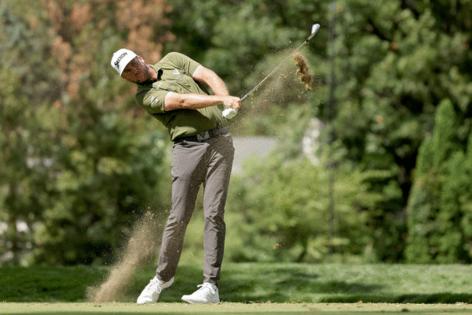 He did come here once, actually — to pitch in the Junior League World Series in Taylor, where, as he recalls, his team got smoked because the American kids were a little bit older and so much bigger and stronger.

Pendrith is getting his revenge this week at Detroit Golf Club, where for four holes in Friday's second round, he was pitching a perfect game, en route to a 7-under 65 that gave him the lead by one stroke over Tony Finau at the halfway point of the Rocket Mortgage Classic.

Pendrith is one of several PGA Tour rookies on the leaderboard, along with his playing partner Lee Hodges (12 under), Cameron Young (10 under) and Sahith Theegala (9 under). For the first four holes Friday, Pendrith and Hodges matched each other, birdie for birdie. Hodges shot 66.

"It was great," Pendrith said. "You kind of build off that. The starts that we had were awesome. It kind of set the tone for the round and both of us were just trying to make as many birdies as we could."

For the record, they combined for 15 of them on an afternoon where the breeze was there, but not blowing nearly as hard as it was for the afternoon wave in Round 1.

PGA Tour vets Russell Henley and past British Open winner Stewart Cink were tied with Young at 10 under, while former Masters champion Adam Scott, world No. 4 Patrick Cantlay and Si Woo Kim were part of a six-way logjam at 9 under.

Pendrith, at 15 under, set the 36-hole scoring record, which was established in the inaugural playing of the Rocket by eventual champion Nate Lashley, at 14 under. Finau matched that an hour before Pendrith finished off his round.

For Pendrith, being in Detroit is special for a couple of reasons. For starters, the proximity to his hometown has him well-supported this week — he's been serenaded with, "Oh, Canada," by the galleries here — and he's just three hours from his alma mater, Kent State. Then there's the biggest reason: This is just his third tournament since The Players Championship in March. He suffered a stress fracture in a rib on his left side, and couldn't even touch a club for 12 months. The only saving grace: The layoff came during the NHL playoffs. The diehard Maple Leafs fan watched just about every game, every night.

"I had been playing nicely before The Players, as well," said Pendrith, 31. "I played good at the Honda (two weeks earlier) and got some momentum, and felt like I was just getting on a run of playing really nice golf. To have to sit out for almost four months after that really sucked, but honestly, couldn't really do much about it. Just tried to stay patient and know that it's going to heal and I'll be back at some point."