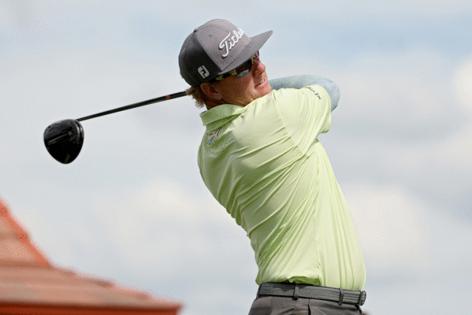 DETROIT — Troy Merritt already has made a pretty impressive mark on Detroit. He made an ace at the tough par-3 11th hole at Detroit Golf Club in the third round of last year's Rocket Mortgage Classic, then made it into a playoff before falling to champion Cam Davis in an epic five-hole slugfest.

Now, Troy's cousin by marriage is aiming to put her own stamp on the city, just a few modest par 5s southwest of Palmer Park.

Kate Achter, Detroit Mercy's new head women's basketball coach, is the cousin of Courtney — "The best athlete in the family," Kate said — who married Troy in 2010. Kate was out walking Detroit Golf Club on Thursday afternoon, the first day of the Rocket Mortgage Classic.

"We're just chasing him around all day," said Achter, just off the 18th green, as Merritt was about to make the turn. "He loves the course. He always talks about it."

Achter, 35, was out walking with her dad and sister, as well as one of Merritt's sons, Scout.

They saw him make the turn at 3 under en route to a 4-under 68 on a windy afternoon, with a first nine (the back nine) that almost included another ace at the 12th. He hit it to 2 feet, 5 inches, and made the birdie putt.

Achter wasn't going to get to complete the round, as she was planning to leave early to pick up an out-of-state recruit from the airport. She's got a whole lot of work to do to rebuild a roster for a program that has won five games, total, the last three years, under three different head coaches.

You can understand why, when asked if she plays golf, Achter says: "Yeah, I used to be a really good golfer, and then I became a head coach. And now, I can't golf."

How little does she play?

Let's put it this way: There's a Detroit Mercy golf outing coming up, and when the organizer asked her what kind of golf balls she played, she told him Titleist NXT.