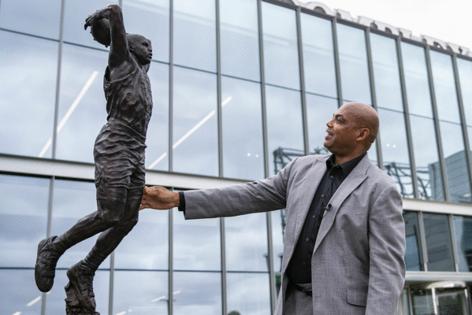 But consider the source.

We’re talking about a man who once spit on an 8-year-old girl.

That sentence came Saturday morning from former 76ers star and current TNT basketball analyst Charles Barkley, regarding anyone who criticizes his contemplation of joining Saudi-backed LIV Golf as an analyst. Barkley told 94-WIP host and longtime pal Howard Eskin that he dined with LIV CEO Greg Norman on Wednesday, a meeting at which Norman gauged Barkley’s interest at joining LIV.

No offer was made, Barkley said, and LIV would have to “blow me out of the water” to leave TNT and risk losing lucrative endorsement deals with the likes of Subway, Dick’s Sporting Goods, and Capital One. Barkley has three years and $30 million left on his TNT deal.

Barkley will play in the pro-am Wednesday ahead of the three-day exhibition that begins Thursday at Donald Trump’s course in Bedminster, N.J. He should show up a day early.

On Tuesday, Terry Strada, the chair of 911familiesunited.org, will hold a press conference at a nearby library, according to the New York Post. Strada’s husband, Tom, was a bond broker killed in the Sept. 11 attacks on the World Trade Towers. The World Trade Towers stood less than 50 miles from Trump Bedminster. Tom Strada was an avid golfer, and Terry Strada told the Post that the players on the LIV Tour who diminish the Saudi role in the 9/11 attacks is “like pouring razor blades in the wound.”

Barkley, who is a member of the media, can attend that press conference Tuesday. He can ask Terry Strada if her outrage is “fake.” Maybe.

Recently declassified documents more closely than ever connect the Saudi government to the 19 terrorists who hijacked and weaponized four airliners on Sept. 11, 2001. Those attacks killed 2,977 civilians, soldiers, and first responders and helped spark wars in Iraq and Afghanistan that cost nearly 7,000 more American lives.